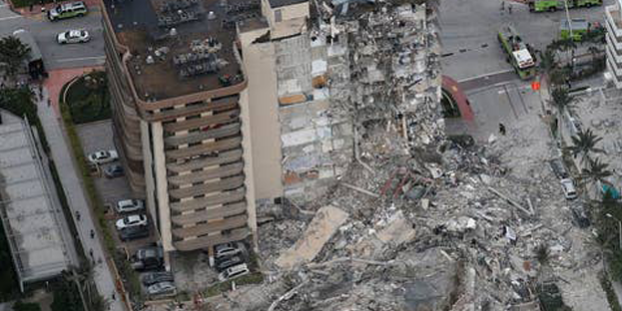 It happened in Florida.

Of course, it did.

It also happened in what might cynically be called history’s richest third-world country.

Profit is always first and foremost in the USA.

Don’t dwell on the dead.  Never mind the rescue workers who will have to put their lives at risk.  As the first responder’s efforts inevitably change from rescue to recovery, my heart breaks for them and the victims.  Before the tragedy, the engineers reported cracks and erosion?  That pesky maintenance bill could wait.

Of course, it could.

The collapsed part of the L shaped building in Miami wasn’t on Collins Avenue.

Of course, it wasn’t.

The collapse faced the Atlantic.

As South Florida’s precarious shoreline continues to sink, salt water increasingly seeps into the foundations of buildings that kiss the Atlantic’s rising seaboard.  Water and fire always seek their least resistance.  I know that.

I served on the FDNY for 20 years.  My company arrived first at two collapses in the South Bronx and later arrived at another in Harlem. I witnessed devastation at all three.  I also labored for days in the rubble of the biggest building collapses in history, The Twin Towers, so I know a little something about collapses.

There are three types: V shaped, lean-to and pancake.  Think about how they’re labeled, and you can visualize each of them.  In a v shaped colipase, the center caves in.  This allows voids on both sides where rescue workers might find survivors.  In a lean-to collapse, one side of the floor gives way.  This allows victims to survive under that large one-sided void.

The tragedy in Florida was a pancake collapse.  The building buckled floor atop floor. No voids.  That means few survivors amid the rubble.

Of course, I pray I’m wrong.

The real tragedy in Miami is that the collapse was probably preventable.

Of course, it was.

There will be many more misfortunes before we smarten up and not just in Florida.

If we continue to ignore our scientists and instead listen to politicians, religious zealots, and biased newscasters, you can make book that more people will die needlessly.  We humans have ignored science before, and let the priests and politicians run things.  The result was the Dark Ages.  It took scientists to bring about the Age of Reason.

Of course, it’s not only climate change.

During the pandemic, scientists warned us to wear a mask and distance ourselves.  Did we listen to the experts?  Of course, we didn’t.  Instead, we listened to Doctor Google and his partner in crime Professor Facebook.  The uninformed and uneducated directed the masses toward indifference and destruction, which resulted in 600,000 American deaths.  The United States just flew an electric helicopter on Mars.  Scientists run things there.  We can’t even run an electric clothes dryer in Texas.  Politicians run things there.

When the ground beneath them shook and the building collapsed that tragic Thursday morning, more than a 150 people found themselves separate but buried together inside the Champlain Towers condominium.  By now, most of those missing in Surfside are, I fear, dead. The condominium has become a crypt.

Will we at last learn that an ounce of prevention can be worth a pound of cure?

Of course, we won’t.

Not here.  Not in the United States of “Amnesia.”

Nothing to see here.  The beat goes on!  Of course, it does.