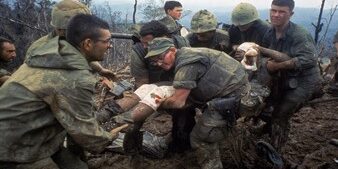 When I was nineteen, I was stationed in a remote Laotian village bordering the Mekong River. I was an Irish kid from the Bronx, nearly 14,000 miles from home. It had been a twenty-two-hour plane ride to get, “in country” and another four excruciating hours strapped to a cloth harness attached to the perimeter of a cargo plane to arrive in Nakhon Phenom, a town Bob Hope called, “the armpit of the world.”

My first day in town seems surreal now. I remember walking up a dirt road and gaping at a toothless woman in a sarong prodding a yak.  Sadly, I remember even more clearly the nausea in my own well-fed stomach, as I turned a corner and was confronted with throngs of swollen bellies huddled on the side of the road. Attached to the swollen bellies were revoltingly emaciated bodies with twig like arms extended for food. The whining voices belonging to the bellies wanted money: money to buy food, money to make the pain of hunger go away.

I had some money, not enough for their needs, certainly not for all of them. “Do I give all I have?” I thought. “How else could I claim to be human?  But what about tomorrow? There won’t be any fewer of them tomorrow.”

When I had signed my enlistment papers two years earlier, I had no idea that a dusty dirt trail in a remote village I had never heard of was where I was destined to collide head-on with my humanity. A 19-year-old boy should not be forced to confront his conscience like this. I loved my country in a way that maybe only an immigrant can. I felt I owed it everything and when my country led me to believe I was needed to stop communist aggression, I was only too happy to settle my debt.

The heat lays heavy in the jungle and like a spoiled overweight child it insists on being carried everywhere. You can’t put it down for a second. The heat wears you out and beats you up and when it goes away after nine tedious arid months, the jungle hands the baton to another thug to finish you off. The thug that grabs the hand-off is called monsoon, and he brings with him a never-ending torrent of rain every day and night for three months. Monsoon turns the soil into a gigantic sponge which sops up every drop of water from the jungle canopy and turns the cracked soil into a sea of mud.

Mud was everywhere, not just midst the mangroves, but in the hootches where we slept, in the showers where we washed, on our toothbrushes and shaving gear; mud was in parts of our body almost as remote as the jungle itself. The mud mixed with the dampness and gave it a texture much more permanent and penetrating, like cement.

Not surprisingly, my enlistment brochure didn’t contain any pictures of that mud, nor of the 48,000 American boys who were shipped home in body bags. Those thousands of poor young boys, once dirty and wet, were now clean and dry.

They made the supreme sacrifice, so that the Vietnamese could be free to make their own choices.  To ensure this fundamental right of man, they would, in President Kennedy’s words, “pay any price, bear any burden.”  The price they paid was the ultimate one.

The men who bore this exorbitant cost were swindled.

They were not shown U.S. intelligence reports declaring that if there were free elections in Viet Nam, Ho Chi Min and his communist party would have won overwhelmingly.  So, there could be no free elections.

Instead, the U. S. would install a Christian puppet friendly to our government, Ngo Dinh Diem.  LBJ had called Diem, “a son of a bitch, God damn it, but at least he’s our son of a bitch.” That was only one of multiple lies the U.S. government spewed about the war.

Our President railed that the U.S.S. Maddox was fired upon by North Vietnamese forces. This “attack” in international waters led to the direct and massive buildup of American forces in the region. The Gulf of Tonkin Resolution was written three months before the attack; however, any many years after it was passed, President Johnson said, “Hell, for all I know, we could have been shooting at a bunch of seals out there.”

The young soldiers in the field were not privy to such remarks.

No, the generation of young men who fought the Viet Nam war trusted authority. We thought because people in authority are experienced, they usually know best. We were hopeful and idealistic.  Most of us believed in our country, believed that freedom has a price and that we lived in a country, which represented democracy and freedom around the globe.

We also believed, as we know now erroneously, that our government was committed to this paradigm.

Age has not blessed me with wisdom, but I do know that old men start the wars.  I sincerely believe that the war mongers feel truth is just a game, a game to be believed by children, a game that must be played by young idealistic boys.

Old men make the wars, but they don’t fight the fight. The politicians that start the wars are too important to fight, too important and too busy. Too busy lobbying, too busy collecting the lucrative pensions they have allocated themselves, and too busy assigning defense contracts to companies that will employ them after their tenure in congress.

Combat is for the young, with mountains of time and for whom the years mean nothing. A young man may feel immortal, but a body bag doesn’t have room for such delusions.  Reality registers quickly in combat and options must be weighed: he cannot desert, for all that’s out there is the enemy and the jungle. If he decides the stockade is preferable to death, he will abandon his brothers and forfeit his honor.  The young hold both their honor and the approval of their peers priceless, so once they get to the battlefield they commence to kill.

The perpetual conundrum for the old bastards who start these wars is how to get young boys to commit to the battlefield.  They solve this puzzle by selling young boys on a counterfeit cause: freedom. War is somehow always about freedom, whether it is to ensure it, or make the world safe for it.  The old men who spin these yarns preach that the only way to ensure freedom is to liberate the villages, liberate the towns, and liberate the cities.

We did exactly that in Nam.

We sent in mortars to soften up a village, then sprayed it with machine gun fire before occupying it to kill whomever we suspected might be the enemy. After these “patrols,” some of us would wash away the memories of such philanthropic antics with tumblers of Johnny Walker.

We drank at the community lean-to back at the base, a lean-to which was appropriately christened, “Bombs for Peace.” I vividly recall guzzling a pitcher of Manhattan’s and looking up at the television set to see President Nixon make an urgent address to the nation. His words were clear, concise, and emphatic, also complete bullshit.

“We are not now bombing, nor have we ever, bombed the country of Laos.”

So, I guzzled my drink, rolled a nice fat joint, and went outside to smoke it.  It was 8:45 now. The Air Force usually started napalming Laos about 9 pm. I didn’t want to miss the show. After all, how many people get to see bombs that don’t exist?

Old enough now to comb what little hair I have left with my hand; age has replaced my innocence with cynicism. In cahoots with our law makers and arms makers, our mainstream media manufactured popular consent to invade Iraq and Afghanistan.

The people of Iraq never had links to Al Qaeda.  They were not responsible for blowing up the World Trade Center.  We have long since given up finding the weapons of mass destruction that our media and government told us they had.  We forced two million Iraqis to leave their country and have killed, by most accounts, a million more. We have obliterated their bridges, hospitals, and schools. We have succeeded in getting four thousand brave Americans killed and we have managed to get 70,000 more maimed at a cost of what could ultimately be $3 trillion.

President Biden and our military screwed up in Afghanistan.

That sentence is as true as God.

Now.  Ask yourself, which leader didn’t?

They all did.  Of course, they did.  We would have to go back to Alexander the Great to find a leader who didn’t screw up in Afghanistan.

We invaded Afghanistan in a $3 trillion dollar vehicle equipped with four bad tires, no reverse gear and loaded with arrogance — an accident begging to happen.  Afghanistan was worse than a crime. It was a mistake.  We ally ourselves with collaborators and mercenaries in Vietnam, Afghanistan, Iraq, and Vietnam while who profit?

These wars were national travesties that bring to my mind a distant echo, an echo that reverberated in my brain much too often in Viet Nam. An echo which belonged to a voice heard more than half a century ago in another country, in yet another war for freedom.  One unlike the three above, one that was justifiable.

An anonymous young soldier, just arriving in Normandy during WWII, looked around him at the devastation wrought by the withdrawing forces and said, “Boy, we liberated the hell out of them.”

Only the dead have seen the end of it.