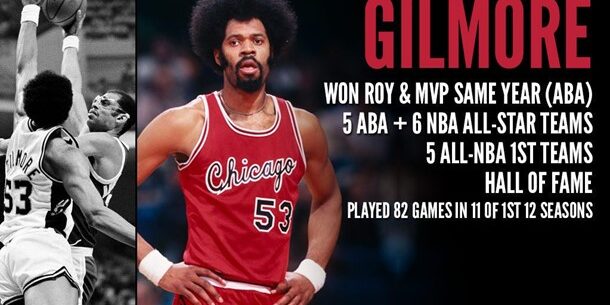 While watching the NBA Playoffs, thoughts brought me back to my most memorable night at a NBA game.

It was November, 1977.  It was a game at The ‘Fabulous’ Forum in Los Angeles.  It was the Chicago Bulls versus the LA Lakers.  It was a battle of 7-footers…Artis Gilmore versus Kareem Abdul-Jabbar.

Allow me to set the stage…

I had recently moved from a small town south of Boston to Marina Del Rey, California.  I was living in the same apartment complex as my former college roommate and fraternity brother.  We were avid sports fans who both played sports in college.  Our old college buddy and fellow fraternally brother was basketball great Artis Gilmore – or as we fondly called him, ‘A’.

In my sophomore year of college, the 7’2” Gilmore, aka the ‘Gentle Giant’, led little Jacksonville University to the NCAA Finals against mighty UCLA.  We got screwed in that game, but that’s a story for another time.

After those cherished college days, Artis went on to become a legendary professional player and is a member of the Naismith Memorial Basketball Hall of Fame.  But more importantly, he, my old roommate and I remain good friends to this day.

Again, it was 1977.  Artis and his Bulls were coming to town to play the Lakers.  Needless to say, the game had been on our calendar for months.  We were looking forward to seeing our old friend…and eager to watch him push around the Lakers and skinny Kareem.

As always, Artis had tickets waiting for us at the ‘will-call’ window.  We had great seats on the floor behind the basket – the typical location for players’ family and friends.

So, I suppose you’re now expecting game specifics.  Hell, it was nearly 44 years ago.  I have no clue what happened in the game.  I don’t even remember who won. The memorable part of the night started after the game.

Along with tickets, Artis left us credentials to get into The Forum Club – the private lounge of Lakers’ owner Jerry Buss.  It was reserved for Buss, players, celebrity friends and, most notable, beautiful women (aka ‘groupies’). The ladies would sit at Jerry’s private table.

It’s LA….did you expect anything different?

As we showed the guard our credentials, I’m sure he wondered who the hell my buddy and I were.  Two nobodies at the time, we just smiled, nodded, and walked into the dark, luxurious club.

As we perused the place and found a table to wait for Artis, I noticed a bunch of guys at the adjacent table.  A few of them looked familiar, but I didn’t want to stare.  However, it quickly became apparent to me who they were, as I, astonishingly, recognized Peter Cetera, Robert Lamm, and Terry Kath!

For those unfamiliar with those names, they are members of the iconic band….Chicago!

A huge fan of the band since back when they were originally known as The Chicago Transit Authority, I tried not to be in awe, but did start a polite conversation.  When I told them we were awaiting our friend, Artis Gilmore, they opened up and we talked for a good half-hour.

After Artis arrived, we had one more drink, continued our chat with Peter Cetera, et al, and discussed what to do next.  We assumed we’d just meet Artis back at his hotel for one more cocktail and call it a night.  But hold on…

Artis wanted to visit a nightclub in Hollywood that his friend owned. I said, “That sounds like fun ‘A’, but we came in my car.”  I owned a Corvette!

Now, I’ve had three people in my vette before…but not one who stood 7’2” tall with a 6” afro.  Nor did anyone ever have a gym bag that was bigger than the average-sized person.

The Bulls bus had already left, so there we stood…three fraternity brothers laughing hysterically in the parking lot of The Forum, as we tried to figure out how we’d all fit into my car.  We thought of calling a limo, but fitting into the Vet would be far more fun – and surely memorable.

First, the passenger side T-top came off my car.  Artis’ head and bag were well above the car’s middle cross bar. The removed top went into a small space in back– and it was my other buddy who got the worst of it.  He got crushed, as he barely fit between the two seat-backs.  Luckily, he wasn’t much bigger than Artis’ bag.

Fortunately, we made it to the nightclub without any incidents, albeit numerous looks of wonderment from passersby.

As for our night at the Hollywood club?  Well, if you can believe it, that was the most interesting and crazy part of the night.  However, I’ll never tell….

There are some things in life that stays between friends.