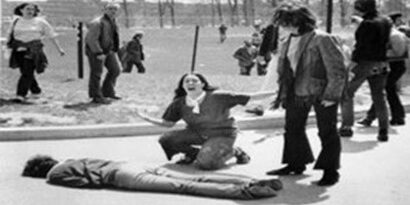 Wearing jeans, a white scarf, and borrowed sandals, a 14-year-old American girl became the most famous unknown person in the world overnight.

John Filo, student photographer at Kent State, took a photo of runaway, Mary Ann Vecchio, in 1969 that was plastered on the front page of every newspaper in the country and firmly into the annals of history.

On May 4, Kent State University students protested over Richard Nixon’s decision to invade Cambodia.  On her way to join the protest, Mary Ann struck up a conversation with a student wearingbellbottoms.  The two watched protestors attempt to taunt and bait National Guardsmen by waving a black flag.  The Guard retreated to a nearby hill.

Mary Ann dove to the pavement as The Guard fired sixty shots in 13 seconds. As the smoke cleared, face down on the ground beside her, Jeffrey Miller’s head poured a river of blood into a pool of dark red. She knelt over his body crying, “Doesn’t anyone see what just happened here?” As the soldiers approached, their guns ready, she still remembers crying. “Why is no one helping him?”   She recalls screaming at them the question that countless others across the country would soon ask as well: “Why did you do this?”

With only two shots left in his camera, Filo snapped the iconic black and white.  The sight of Ann’s 14-year-old’s arms raised in anguish, begging for help riveted the world.  The image of American boys killing other Americans, on American soil expressed the grief and horror much of the country was feeling.   Filo captured the hopelessness and horror of a divided America on the face of that 14-year-old girl and won himself a Pulitzer Prize.  Sometimes called The Kent State Pieta, Filo’s snapshot did as much to stop the Vietnam War as the Pentagon Papers.

Many iconic photos have already outlived the men who took them. Anyone who has ever seen it will never forget the frightened, screaming Vietnamese child, Kim Phuc, running on a wide dirt road, naked, napalmed, and helpless.  How about an emotionless Vietnamese Police Commissioner firing a 38 automatic into the temple of a suspected Viet Cong regular, or Neil Armstrong’s white boot, footprinting itself into the dust of the moon?

So what? What does it matter?

It’s only a photo.

How much can one image accomplish?

Ever hear about the Orangeburg Massacre?  I didn’t think so.  On February 8, 1968, fifteen months before Kent State, no John Filos were at South Carolina State University.

This we do know.  Students had started a bonfire that night at the front of the campus. As first responders attempted to extinguish it, a police officer was injured by a heavy wooden banister rippedfrom a vacant house andthrown in his direction. Shortly after, eight highway patrol officers fired carbines, shotguns, and revolvers into the crowd of 200 protestors for 10 to 15 seconds.  Twenty-seven people were injured. Most were shot in the back while running away.

The police later claimed to be under attack by small-arms fire.  Protestors denied the charge. They said that they did insult the police and threw projectiles, but no one had a gun. At the trial, evidence that the police were fired upon at the time of the incident was inconclusive.  None of the Orangeburg police were ever found guilty.

No one like John Filo had taken a picture. Crosby, Stills, and Nash didn’t sing about Orangeburg the way they sang about the “four dead in Oh-Hi-Oh”.

Don’t be too surprised.

After all, that was more than half a century ago.  Filo’s iconic image wasn’t shot in color.  It was shot in black and white.

It was South Carolina.

The victims were black, the shooters white.

The difference between the two incidents is black and white.

The three black men who died that day at Orangeburg shouldn’t be looked at as martyrs to a cause,but instead as soldiers in a continuing battle for social justice.