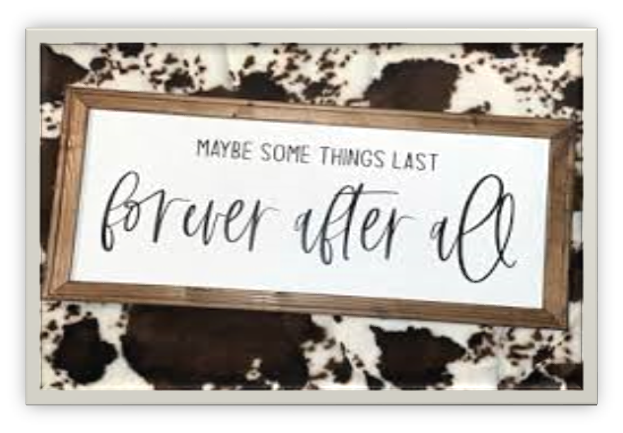 It’s been a while, but I think the time is finally right: strap in because after a run of normal essays, I’m ready to drop another weird one.

We live in a world dominated by capitalism and consumerism. Every time you buy a new product, it’s the best one they’ve ever made. It makes all previous versions obsolete! Without this new product, you’re nothing and nobody! But sometimes, there are products that theoretically last forever, products that could stand the test of time. These are the things that have been rattling around my Dumb Brain recently: things you use but don’t use up.

I got started on this train of thought one night while brushing my teeth. During those two minutes I found myself staring at my glasses. A simple product, a metal frame and two pieces of glass. A product that if I’m careful, if I don’t bend them, or sit on them, or mistakenly drop them in the driveway and then back my car over them only to realize my mistake by the sickening crack of prescription eyewear…they’ll last forever. They are a product whose use will never use them up.

It’s a weird category to consider but I started to look at the items in my house through this lens. I love my TV. I only bought it last year but eventually, the picture will degrade and the electronics will deteriorate. The dumbbells I bought to try to stay in shape through the pandemic (ha! How many of you thought the same?), no matter how many times I lift them, I’ll never use them up! The kitchen knives my mom bought me last year, well, they’ll last a hell of a long time, but eventually a blade will get used up through slicing and subsequent sharpening.

There’s something special about an item you can have and hold and use that will simply last forever if you take care of it. Even things like vinyl records or backpacks or leather jackets, if you use them enough they’ll get used up. Obviously, clothes and music recordings aren’t in same ballpark as your average tooth paste or morning cereal, but with enough use, they’ll eventually fail. It might be a hundred or a thousand years from now but eventually, the grooves on that record will be worn a way, the leather on that jacket will wear thin, and the straps on that backpack will fray and tear.

I know it might sound like I’m having an existential crisis here but, for once, I’m not! I’m actually extremely excited by the fact that even if I found a way to live forever (and I will) and I looked through my glasses every minute of every day for a thousand years, I’m not using up those glasses! I could do a million curls with my dumbbells (and I won’t) and I wouldn’t use them up!

Maybe this essay is the product of having spent a huge portion of the last year and a half sitting in the same rooms looking at the same objects but, to me, there’s just something cool about the concept of an item you use without using it up!

So, what do you think, am I crazy? Probably! But either way, let me know if you think of some cool objects you use but don’t use up!