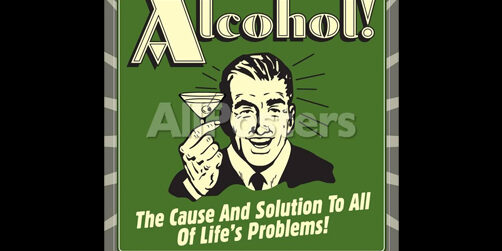 One afternoon, many years ago I was tending bar when an ominous looking man with a Boston Blackie style pencil thin moustache walked in and slid into a seat.  He was barely at his stool when the Killer said, “Alcohol is the cause and solution of all problems.”

“Killer Miller” was an exterminator, hence the benign rhyming nickname.

As a former drunk, the sentence hit my ears like a powerful left hook.

I reached for the top shelf scotch, poured him another pop, and delved a bit deeper.

“Where the hell did you hear that?”

“Homer said that,” he said.

Wow, Killer Miller reads Homer?  Holy shit, I better play closer attention to what he has to say. Who knew he was that bright?

With widened eyes, I moved my mouth closer to his.

Another night, another old friend sauntered into the same bar.

I shoveled a cold mug of draught Bud in front of him and said, “Tommy, me lad. I haven’t seen you in ages.”

“Billy,” he said.  “I doubt that you’ll remember this, but exactly 22 years and nine months ago, you gave me two Quaaludes.”

“Jesus, Tommy.  You’ve got some memory. I can barely remember my wife’s birthday.”

“Not really,” he laughed.  “Today’s my daughter’s twenty second birthday.  The night you gave me the Quaaludes, I was making love to the wife and I was so stoned that I forgot to, well . . . you know.

It always cracks me up when people ask, “Why can’t you just have a few beers on the weekend or a glass of wine at dinner?”

They don’t get it.

Asking me to just have a few beers is like asking a blind man to drive.  It ain’t happening.

I was at a reunion, and five guys I hadn’t seen in decades were talking about the most screwed up that they’ve ever been.  I was in every story, every bloody one.  You know you’ve got a drinking problem when you ask the waitress at Denny’s which wine she recommends with the Grand Slam.  You just know.

It’s not by accident, we Irish haunt the pubs.  When the Brits shut down Ireland’s schools and newspapers, they forbade us the right of public assembly.  The populace turned to the pubs to plot a little treason and depended on storytellers from Cork and Dublin to bring the latest news.   Our culture was built around saloons.

Some stereotypes are true.  We Irish love whiskey, and duck doctors the way other nationalities avoid COVID.

“Grandma, I’ve got a sore throat.”

“You know what’s good for that now?  Blackberry Brandy.  It will coat your throat.”

“Grandma, I feel a fever coming on.”

“A half glass of Rock and Rye will cure that fast enough.”

“Mix a little Guinness in with his bottle.  That’ll fatten him up soon enough.”

“Grandma, have you ever thought about just going to a doctor?”

“Doctor?  I will in me ass.  Didn’t your grandad go to the doctor, and he gave him cancer?”

With the Irish, every bloody thing is about booze. We even give directions by it.

“Excuse me.  How do I get to the subway for the D train?”

“Ya walk down the hill past Darby O’Gills.  Then ya make a left turn at the Jolly Tinker. Now, bear in mind that if you pass the Blarney Stone, you’ve gone too far.”

No matter their nationality, alcoholics are cunning.  One Saturday night, I was doing a favor for a friend by tending bar in his Italian restaurant.  It wasn’t my kind of joint.  Normally, I work Irish Pubs, but since it was only for one weekend . . .

I walk in the door and my friend tells me, “Look, the chef’s an alcoholic.  No matter what you do, don’t give him, anything to drink.”

Just before the dinner rush, the chef pops out of the kitchen.

“Give me a mug of red wine for the gravy.”

Now, I didn’t just fall off a pumpkin truck. I know what’s up.  However, the bar is starting to get crowded.  What the hell, it’s only a weekend gig.  I serve him up a mug of grape and continue serving my customers.

“Give me another mug of red wine for the gravy.”

I take the air out of his glass and hurry to handle the crowded bar.

Every 15 minutes like clockwork, the chef sticks his head out of the kitchen demanding more wine.

By 10 pm, I’ve only a few stragglers remaining at the bar.

Out pops the chef.

I was at an AA meeting years ago, and the speaker said, “Raise your hand if you’ve ever been arrested.”

About a dozen hands went up.

“Now, drop your hands if you were sober the night it happened.”

Not one hand dropped.

I told my mother a friend of hers had passed.

“Ma.  People die of other things beside drink.”

Apparently, alcohol doesn’t run in my family.  It gallops.

My dad died of cirrhosis.

A powerful man with a quick wit when sober, he was cursed with the powerful misconception held by all too many who had gone hungry as children.  Everything must be consumed, or it’ll be lost forever.  More was the name of the game.  More beer.  More liquor.  More.  More.  Once the seal was broken, he could never bring himself to cork a bottle.

Pop always used colorful verbs.  He’d plow ahead, rake the bit of hair, shovel food into his mouth.  In retrospect, it seems he didn’t feel quite comfortable unless he used a garden tool in his sentences.

When his emaciated body finally surrendered, I rushed to his hospital bed to say goodbye.  He was out cold.  I was afraid he was in a coma.  I nudged his shoulder, “Dad?  Dad?  Do you know me, Dad?”

One blue eye opened.  Four words were all he could muster, but they were more than enough.

“Only too bloody well.”

He smirked before waning softly into the dark night.   Miss ya, Pop.