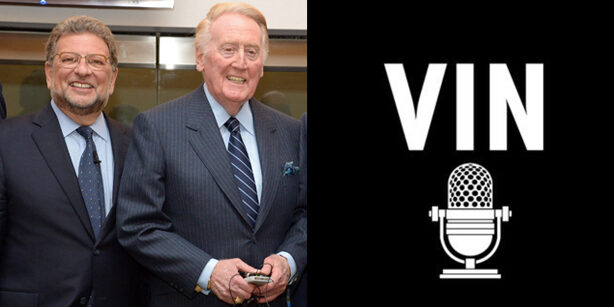 When I was a 5-year old child, growing up on Long Island, playing stick ball on the street with the unrestrained joy of, well, a 5-year old, I started to hear about the Dodgers. Then I heard the Dodgers on a big radio in my mom’s very small kitchen. The sound of the crowd. The crack of the bat. And the voice. The over-arching voice of 25-year old Vin Scully. I was the RCA Victor dog staring at the speaker, mesmerized by the most beautiful sounds I had ever heard. I knew then what I wanted to be when I grew up. But then the Dodgers moved when I was 8. My path was certain, but hardly clear.

Over the years, as a disc jockey, newscaster, news director, 14-years at ESPN and 3 with the Yankees, out of the (Dodger) blue I was offered my dream job for my dream team. I would be leaving New York for Los Angeles. The hard part would be explaining this defining move to my 94-year old recently widowed mom. This was in the small home, in which I grew up, where I listened to Vin on the radio, and “announced” the games on an old black and white television (with the sound down) to an audience of two. My mom and my dad. This is now November of 2004. An emotional day on so many levels. It wasn’t easy.

As I am explaining this to my mom…the phone rings. 323 area code. I answer…”hello.” At the other end…”Charley, it’s Vin. I just want to welcome you to the Dodger family.” In that seminal moment, in that tiny house, there was Vin in my ear, just as he had been 50-years earlier.

From the moment I joined the Dodgers he was always and unfailingly welcoming to me. Rick Monday, the late Billy DeLury, Vin and I had a pre-game lunch or dinner, day game or night for years. By our count, it was many more than a thousand. It was just four guys talking about life, music, theater, stuff and some sports. There was no agenda. Just four guys. I had been approached to write a book some years back, and I was reluctant. I asked why Vin hadn’t written a book. He responded with the simple elegance of Vin. “It boils down to the three E’s.” “The three E’s?” I responded. “Yes, I don’t have Energy, the Ego, or the Economic need.” Consequently, because of Vin, I remain happily reluctant.

Vin didn’t particularly like being the center of attention. He was always most comfortable in the booth, in a controlled environment. He loved being in the press box, with the security folks, the reporters, and those who were there working everyday. He did his job (more expertly in his field than anyone who had ever done it) and was eager to go straight home when the game was over. I confess I am the same way. I asked him about that, and what advice he might have for me. Now we get to Vin’s four B’s. Be there. Be early. Be seen. Be gone.