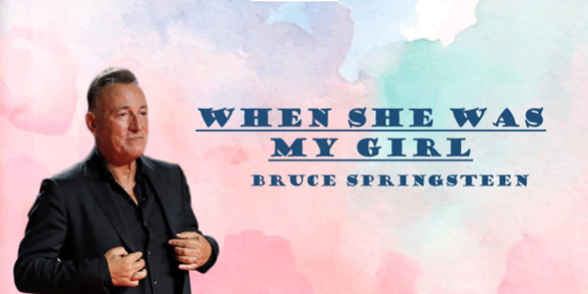 Why I love both versions of When She Was My Girl for different reasons.

Any writer who is fortunate enough to have his song covered by two such great artists is miraculously fortunate. I count my blessings daily.

Larry Gottlieb and I wrote the song in the Motown tradition of sad lyrics in an up-tempo major key. David Wolfert produced it brilliantly in its first iteration, and The Four Tops sold it with a most amazing vocal performance. Although Bruce and The Tops sang the same song, I think of the two versions as completely separate entities.

The Four Tops’ rendition gives the song a wink and a nod, as if loss is not that bad. You hear it in, among other things when Levi sings The Big Legged Girl is Gone, and the background vocalists put doo-wop riffs on the instrumental! Big fun. The group is having a ball. From this incredible live rendition, the sense is that things are going to work out for the singer. The future is bright.

Bruce takes it into a world of the pain of rejection. In that regard, it is in the tradition of Thunder Road and other classics. “The screen door slams. Mary’s dress waves.” Each sentence is a metaphor for the end of the relationship. The door slamming means it’s over, and the wave of her dress is a wave of goodbye. Bruce’s version of When She Was My Girl gives voice to the pathos of the situation.

When She Was My Girl was written about deep regret, framed in the optimism of a major key in an up-tempo rhythm to deliberately evoke a mixture of hope and despair. In Bruce’s version, the singer acknowledges that he lost a deeply fulfilling relationship due to something for which he takes responsibility. He knows this duality; love can be both the greatest thing in the world, and it can be brutally unkind. Love is especially unkind when the chance was there for it to blossom and, instead, it withered. Lost love is a wound that never fully heals. Springsteen’s songs live in the world of unhealed wounds. He knows the painful echoes of a relationship that has gone wrong, especially when the pain is self-inflicted.

At the time Larry and I wrote When She Was My Girl, Born to Run was on the charts. I owned two of those albums because I wore one out playing it on my turntable. Bruce’s description of losers and love lost resonated deeply with me because it was so relatable to my own experiences. Fast forward to now, like him, I’ve learned that many people who have found a degree of comfort from the success of their work still never fully heal the wounded emotional part of themselves. One way or another, each of us is the walking wounded. Nobody gets out of this life unscathed.