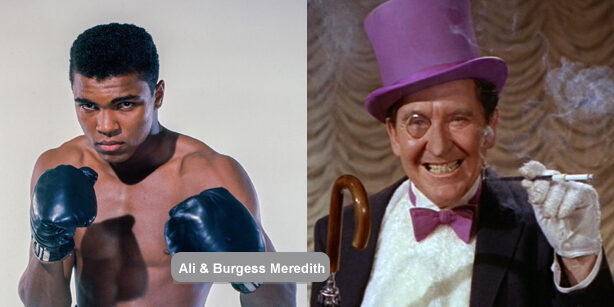 This is from memory, so the year will come to me later.

My late partner Frank Shaw and I had written a Bill Cosby Special. We were taping it at NBC in Burbank. One of the guest stars was Burgess Meredith, glowing in his newfound fame as The Penguin on the Batman series. I didn’t care. To me Burgess Meredith was Ernie Pyle in The Story of G.I. Joe, George in Of Mice and Men, and he directed Ulysses in Nighttown Off-Broadway.

You come to Hollywood and you get to meet your heroes. He was one of mine and here I was sitting next to him in the bleachers watching Cosby rehearsing a sketch. I don’t remember a word of our conversation but it was just the two of us. I hope I told him how much I liked Ulysses in Nighttown.

Muhammad Ali walked on the set and everything came to a halt. The cameramen, the actors, the rest of the crew; everyone just stopped working and watched Ali and Bill chat for a couple of minutes. And then Ali walked off.

“Damn, that was Muhammad Ali!” Burgess said. Flip Wilson was taping his own show on the next stage. I knew Muhammad was a guest and he probably wandered over to say hello to Bill.

“That man is my hero. I worship him,” Burgess continued. “I can’t believe I just saw him in person.” I didn’t get it then but stars have stars, too.

I went down to the stage and said to Bill; “I was with Burgess in the bleachers when Muhammad Ali came over. I know he would love to meet him. Can we arrange it?”

X worked for Bill. I found X. “Bill would like you to arrange for Burgess to meet Muhammad Ali.”

Why not? I cut through our set and went to the adjacent studio where Flip Wilson was rehearsing his show. Down a hallway to the line of dressing rooms until I found the name on the door: Muhammad Ali. I knocked.

Muhammad Ali was sitting on a couch, watching television.

“Bill asked me to come over. Burgess Meredith wants to meet you.”

“Burgess Meredith? He’s a great American actor. He was Ernie Pyle in The Story of G.I. Joe, he played George in Of Mice and Men, he directed….”

“Never heard of him.”

Ali did a slow turn. “The Penguin?”

“The Penguin wants to meet me?”

I ran back to the Cosby stage.

“Bill told him you were doing the show and he said he would be thrilled to meet you. I’ll take you to his dressing room.”

“He knows who I am?” Burgess said.

I knocked. Ali opened the door.

Burgess held out his hand, “Muhammad Ali, I am so delighted.”

Muhammad Ali opened his arms and embraced Burgess. When they separated Burgess reached in his jacket pocket and handed him a 5×7” photo of himself in his Penguin costume, umbrella and all.

“Would you autograph it?” Ali said.

“Of course. Do you have one of yourself?”

Ali came up with his own photo.

As these two stars searched for pens, I left.