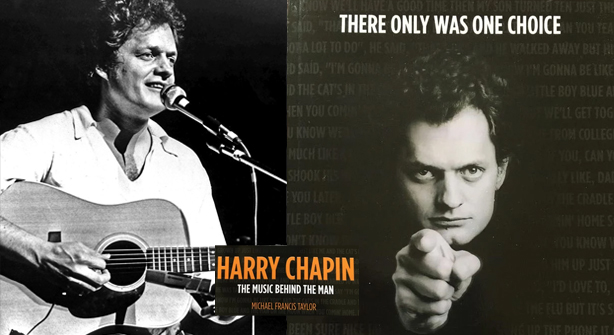 There’s so much darkness in the news. Murder. Frightening truths about a corrupt and vindictive former president. Hard economic times. A bloody war in Ukraine. Sadness seems to be everywhere. It’s actually hard for me to watch the news and stay informed.

I’d like this morning instead to remember a good and decent man who left us 41 years ago this week in a tragic car wreck on the Long Island Expressway.

His name was Harry Chapin.

If you are old enough to remember, you know he was a troubadour, a story telling folk flavored performer who sold millions of records with songs like “Cats in the Cradle”, “WOLD”, and of course, the near mythic single, ‘Taxi”.

Rather than talk about Harry as merely a great performing artist, I want to talk about his compassion, his astonishing selflessness and generosity.

Harry raised tens of thousands of dollars for the Performing Arts Foundation, the principal theatrical group on Long Island, and mobilized the business community to support the arts.

He was a key participant in the creation of the Presidential Commission on World Hunger in 1977.

In 1987, Chapin was posthumously awarded the Congressional Gold Medal for his humanitarian work.

I believe President Biden should select him for the Medal of Honor, posthumously.

He appeared in many benefit concerts for causes, including a campaign against world hunger, environmental and consumer issues and the Multiple Sclerosis Foundation.

At one time, more than half his concerts were benefits.

One report quotes his widow saying soon after his death — “only with slight exaggeration” — that “Harry was supporting 17 relatives, 14 associations, seven foundations, and 82 charities.

Harry wasn’t interested in saving money. He always said, ‘Money is for people,’ so he gave it away.” Despite his success as a musician, he left little money and it was difficult to maintain the causes for which he raised more than $3 million in the last six years of his life.

The Harry Chapin Foundation was the result.

Harry’s foundation has now raised tens of millions of dollars for the poor, the hungry, the disenfranchised, and the arts since his death, and it is still going strong today.

No performer before him did as much for as many, and he ushered in an era for artists using their work for good. Artists like the late John Denver, Bono, Sting, James Taylor, Peter Gabriel, Taylor Swift, and many, many more were inspired to donate their time and energy to make this planet more harmonious, more humane…healthier and happier.

I never met Harry, though my closest friend knew him well, and though my friend is an “orthodox skeptic” about Hollywood and celebrities, he once said of Harry, without irony or sarcasm…”He was the real deal.”

On the day Harry died in a car accident in July of 1981, I was with my friend and his wife when he got the call.  I’ll never forget that moment. There were real tears, real loss, and deep sadness.

Harry believed greatness wasn’t as important as goodness, and were he alive today, he would be appalled at what he saw from our leaders and representatives on the Far Right.

I believe Harry would’ve considered public office if not full time public service…in fact, I’m sure of it. This planet was better for his presence, and millions of people lives were improved and bettered from Harry’s efforts.

What greater accomplishment is there for a human being?

“Oh if a man tried

To take his time on Earth

And prove before he died

What one man’s life could be worth

I wonder what would happen

Those lyrics are written on Harry’s epitaph.

Miss you Harry. Wish you were here.

Through Toughest of Times, UFC, MMA Emerge as Constants in an Uncertain Sports World
August 30, 2021
Blog & News Posts
Blog & News Category
Go to Top
We use cookies on our website to give you the most relevant experience by remembering your preferences and repeat visits. By clicking “Accept”, you consent to the use of ALL the cookies.
Do not sell my personal information.
Cookie SettingsAccept
Manage consent