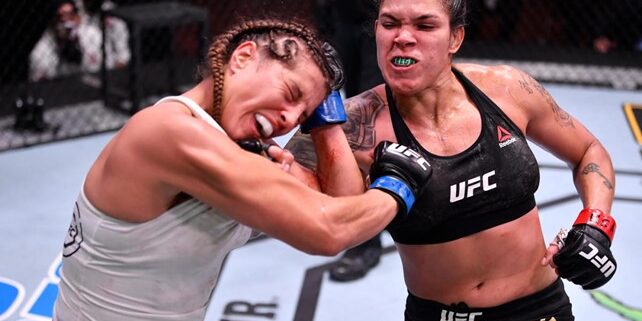 Summary: As the world has been turned into disarray during the COVID-19 pandemic, the Ultimate Fighting Championship took the lead in returning to action and provided a reprieve from the doldrums, with stars such as Israel Adesanya, Jorge Masvidal, Amanda Nunes, Dustin Poirier, Kamaru Usman and Conor McGregor leading the way.

Roughly 16 years ago, The Ultimate Fighter aired its first season and mixed martial arts sneaked its way into our living rooms.

Yet fighting, and our passion for it and watching it, dates back thousands of years.

In a very unique way, the sport of mixed martial arts is the youngest and oldest major sport there is.

In the here and now, following a 2020 we would all love to forget but will recall until the sun grows cold, the Ultimate Fighting Championship became an almost weekly sporting event to entertain and rescue us from the stagnations of our quarantined ways.

As the world has been ravaged by the COVID-19 pandemic, so too has the sports world been turned every which way. It was the UFC that emerged — spearheaded by the efforts, albeit oft controversial, of UFC president Dana White — as a constant in delivering anticipation, action, and relief from the doldrums of a downtrodden day-to-day that had set in.

The UFC and mixed martial arts are not in a boom period, they do not boast an abundance of megastars who are popping major pay-per-view numbers. Instead, this is the era in which MMA has made its way into the norm of the sports world.

UFC events are the backbone of ESPN+ – and major events draw the eyes of professional athletes from other sports and celebrities. Bellator MMA has found a new home on Showtime. The Professional Fighters League, which has also become a staple of ESPN+, boasts two of the brightest and burgeoning female stars in former Olympic gold medal judoka Kayla Harrison and Clarissa Shields, one of the greatest and most decorated women’s boxers of all time.

No longer fighting for legalization in states and battling the media in defense of its barbaric stereotypes, MMA is here and everywhere.

Of the UFC’s 13 champions (including interim), there are titlists from Australia, Brazil, Cameroon, France, Kyrgyzstan, Mexico, Nigeria and, of course, the good ole U.S. of A.

Rivaled only in history by tennis, mixed martial arts has stood above the rest of the sports world in providing a marquee in which women can claim ownership to the top billing just like their male counterparts. It all began with the meteoric rise of “Rowdy” Ronda Rousey. Rousey has moved on, but the sport still boasts female stars who can and do headline events such as UFC women’s flyweight champion Valentina Shevchenko and UFC strawweight queenpin Rose Namajunas, Bellator featherweight titlist Cris Cyborg, the aforementioned Harrison and Shields, and on and on.

As the sports continues to grow and evolve, we are smack dab in the midst of the golden age of talent. Amanda Nunes – having done away with the other legends of her craft named Rousey, Miesha Tate and Holly Holms – is the greatest female fighter that’s ever graced the cage. UFC welterweight champion Kamara Usman has become an unstoppable force and Bellator featherweight titlist A.J. McKee is a bright, brutal star on the rise.

So novel still is the sport of mixed martial arts that it’s always evolving and this is the age in which many rising stars have trained in MMA rather than just individual disciplines, such as wrestling, jiu jitsu and kickboxing. Talent doesn’t always deliver numbers, of course.

Supernovas such as Chuck “Iceman” Liddell, Brock Lesnar, Rousey and McGregor have vaulted into the mainstream and along the way produced historic pay-per-view numbers and arena gates. The stars will come and go, as is always the case in individual sports, and there will surely be more who rise to the stratosphere.

But in 2020 and 2021, the UFC and the sport of MMA have proven they’re undefeated when it comes to delivering must-see entertainment…no matter how tough the times.