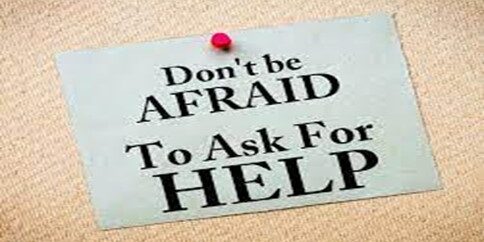 Being an American is very strange. As I’m sure many of you know, it’s a nation filled with contradictions. From patriotism whenever the US Olympic athletes kick ass to shame when certain states refuse to vaccinate their population against a deadly pandemic that has killed millions of people (I’m not naming any names, I’m above that *cough**cough* Tennessee *cough**cough*). But, one of the contradictions that confuses me the most is the dichotomy between our “united we stand” collectivism and the “rugged individualism” that has existed, in spirit, since the founding of our nation. While I absolutely believe in being self-sufficient and trying as much as possible to be a DIY person, I think that we as a country, and myself as an individual (although I’m working really hard to get better at it!), struggle with one thing: asking for help.

Humans are pack animals, plain and simple. We’re not solitary animals meant to scavenge and hunt, breed and raise families, and live and die alone. We need each other and we always have. But, somewhere along the way we started to think that each and every one of us could (and maybe should) make it through this brutal existence alone.

That kind of thinking is on display in all kinds of media from the portrayal of the lone cowboy sent to save the town from whatever vaguely (or not so vaguely) racist portrayal of a villain they decided on that day (*the best John Wayne impression you’ve ever heard* Howdy Pilgrim), to the isolated astronaut sent to the furthest reaches of space to save humanity (*just a pretty good Matthew McConaughey impression* alright, alright, alright).

But I thoroughly believe that humans are at our best when we feel like we can ask for help! Every single script I’ve ever written was pretty much unreadable dreck until I worked up the courage to have some brave soldier wade their way through the spelling errors, muddy stage directions, and vast fields of unnecessary commas. And asking for help doesn’t just improve my writing, it has absolutely improved my mental health.

The past year was hard for me and I bet it was hard for you too. I can’t even count the number of times I had to thank my parents or my girlfriend for hearing me out when I just needed to vent about how frustrated or upset or depressed I felt. I know if I’d tried to handle all of those feelings on my own, I would have exploded into a mess of anxiety (or maybe just a slightly worse mess of anxiety than I already am).

All of this is why I love super hero movies, why I love those dumb as hell Fast and Furious movies! Each and every one of them drive home the point that we’re stronger together, whether it’s taking down god-like villains with humanity erasing powers… or using cars to jump between buildings in Dubai, we’re better when we ask for help and work together, as a family.

So, what about you: are you a pro at asking for help? Or are you working your way up to it, like me?

Category: Inside Will's Brain - By Will PetermanAugust 8, 2021