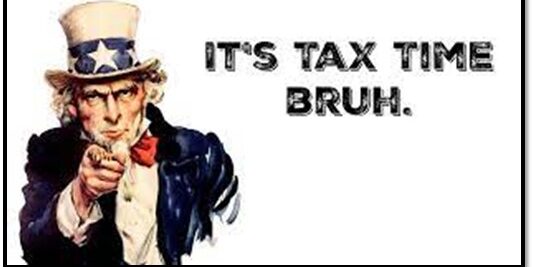 As soon as someone pointed out I should write a post about doing taxes, my mind splintered into a thousand pieces and began imagining a thousand different essays about it. From the Jerry Seinfeld, “what’s the deal with taxes?” type, to the anarcho-capitalist word vomit about how the government is simply a coercive monopoly stealing the sweat off of the collective brows of workers…but then, of course, I settled back into my own little corner of writing, which I have now dubbed: The Three C’s (complaining, critiquing, comedy…ing).

For this topic, I think it’s important to get my feelings out in the open right away, because they’re brave and controversial: I don’t mind paying taxes, at all. I enjoy roads. I enjoy pipes. I enjoy electrical grids. I also have neither the expertise nor the dedication to create any sort of critical infrastructure, and I’ve realized, that’s okay! Because what I can do is pitch in a few bucks whenever I make money (which is very rarely [here’s your yearly reminder that this Substack is free and always has been so please share it, I do this all for you my loves]).

So, while paying taxes is a-okay with me, I obviously have some (read, LOTS) of problems with how those taxes are spent! Roads? Great. Firefighters? Both amazing and sexy. Bombing developing nations because they have oil instead of developing alternative energy sources or healthcare for all, or housing the homeless? Yeah, pretty bad, man. But, again, theoretically I’m cool with the concept of taxes!

This part will be quick: tax rich people more and poor people less. That seems easy right? I don’t care how good a billionaire’s accountants are, they shouldn’t pay less in taxes than me, a guy who every so often googles how much a kidney sells for on the black market because really, I’m only using one of them and an apartment with two bedrooms and air conditioning sounds pretty incredible.

The whole process is insane and unnecessarily complex, but you know what…I don’t have an answer on how to fix it, because if I did, I wouldn’t be writing opinion pieces on how much I hate bees, I’d be on a think tank somewhere contributing even less to the world!

On Current Events in the Ukraine
March 2, 2022
Blog & News Posts
Blog & News Category
Go to Top
We use cookies on our website to give you the most relevant experience by remembering your preferences and repeat visits. By clicking “Accept”, you consent to the use of ALL the cookies.
Do not sell my personal information.
Cookie SettingsAccept
Manage consent