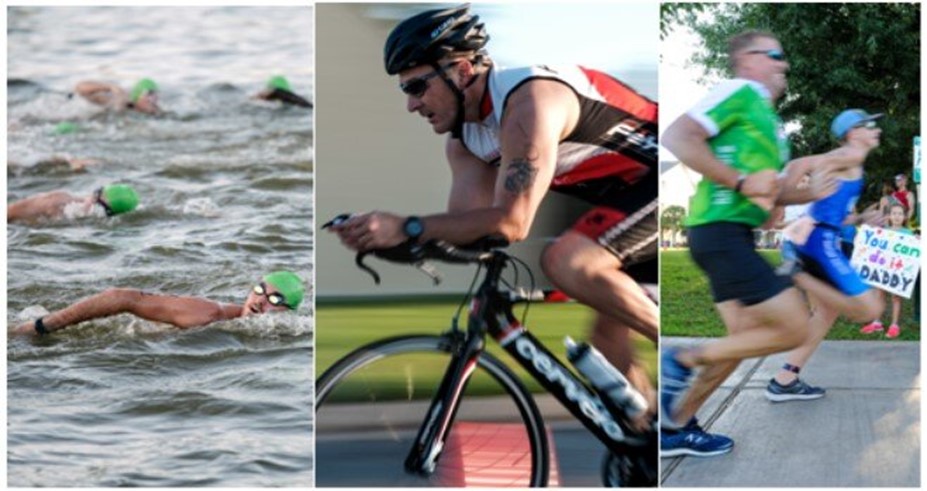 My assistant said, “Carl Thomas is on the line.”

Carl Thomas was the Vice President of Marketing for Speedo, the country’s leading swimwear manufacturer.  Armen Keteyian and I were working as a two-man P.R. group for a small San Diego based marketing firm called The Phillips Organisation, Ltd.  (That is the correct spelling).

Speedo was our client.

“Put Carl through,” I said.

It was early 1982. Carl had just gotten off a plane from Kona, Hawaii.  He was almost hyperventilating.  “I have been wracking my brains out on how to expand our product line from just competitive swimwear to a larger audience.”

“I think I’ve finally got it.”

“Triathlon?” I asked.  “You mean the sport where you swim forever in the ocean, then ride a bike 75 miles, and finish with a 26.2 marathon run?  That triathlon?”

That Saturday, I along with a VERY large viewing audience sat mesmerized as a 23-year-old graduate student from Cal Poly, Julie Moss, (on tape delay) was within two miles of victory.  She had endured the rugged 2.4-mile ocean’ swim and successfully survived the torturous 112 bike run.  Comfortably in the marathon lead, victory was within her reach.

Dehydrated, she suddenly began to falter. Her smooth strides now stumbles and wobbles.  Only 700 yards from the finish line, she collapsed.  She struggled to her feet however and stanchly soldiered on.  She did this over and over.

Finally, unable to control her bowels, they released whatever they were holding.  Undeterred, she still lurched dramatically toward the finish line.  With a mere 50 yards to go, she was passed by the eventual champion, Kathleen McCartney. Still, ever courageous, Julie found a way to stagger and complete the race.

Moss may have lost that race, but that day she won the hearts of the nation, including one Carl Thomas.

Monday, as agreed, Carl called me.

“I want to do a series of Olympic distance, short course triathlons culminating in a national championship,” Carl said.  “A 1,500-meter swim, a 40k bike and a 10K run. The race will take anywhere from 2 ½ -5 hours but almost everyone can do it.  This could do for swimming what marathons have done for running. What do you think?”

I thought it was a great idea.

“Where does The Philips Organisation come in?” I asked.

“I don’t know how to pull off a large event like this.  You guys have already put the Ektelon-Bud Light National Racquetball Championships on the map.  Let’s do the same for this Speedo series.  Me and Jim Curl, a guy I know from Northern California, will be the race directors. Armen can do the P.R.  I want this to be so big it becomes an Olympic sport.”

Great, I thought.  Bury the lead why don’t you?

To cut to the chase, I developed a plan. The local winners from events held in 12 cities would be flown all expenses paid to Bass Lake, Ca. to compete in the national finals.  The fledgling ESPN network would then televise the national finals just as they had done with the Ektelon racquetball event.

Carl’s boss at Speedo and my boss, Bob Phillips, approved the plan and off I went to St. Louis to sell the Bud Light marketing execs on the sponsorship.  They loved it and wrote us a huge check.

On the first week of June in 1982, on a beach right down the street from my house in Del Mar, California short course triathlon was born.  Several hundred hearty people showed up to compete in the inaugural Speedo- Bud Light Triathlon Series event.   With Carl Thomas and Jim Curl running the events and Armen publicizing, the local events were a HUGE success, as was the televised finals, which I got to produce.

The short course Triathlon became a national and eventually an international phenomenon.  So much so that by the year 2000, short course triathlon, at our very distances, officially became an Olympic sport.  Carl Thomas had seen his dream come to fruition.

Armen and I left The Philips Organisation to nurture our own dreams, but pioneers Carl Thomas and Jim Curl remained to form CAT Sports and make triathlons their careers. And what careers they have had, culminating with Carl & Jim being inducted into the International Triathlon Federation Hall of Fame.