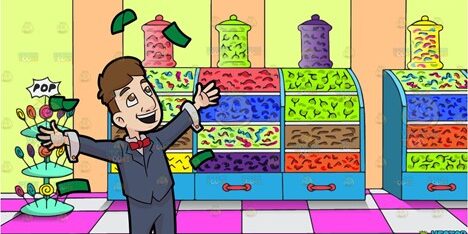 Being an adult kind of sucks. I’m hardly the first person to posit this thought but it’s still true. Even the things that, as a kid, I looked forward to aren’t nearly as cool as I’d hoped they’d be: Driving a car? Sure, have fun in traffic on the way to work. Booze? Yeah beer is great, hangovers and beer guts though, not so much. A steady paycheck? AHAHAHAHAH! I’ll let you know when I get one. There is one thing, however, that’s even better now than it was as a kid: walking to the liquor store for candy.

After a long day of work (or just pandemic life), it can be hard to muster the energy to leave the house or apartment that you’ve spent basically the last eleven months in. You have to put on pants, and shoes, and masks…it’s a whole ordeal. But sometimes you get a craving so insatiable, you just have to make the pilgrimage. Hopefully this essay reaches my fellow urbanites but for those of you fancy enough and successful enough to live where there aren’t liquor stores within walking distance (hi Mom and Dad!) you’ll have to think back to a time when you lived around the hustle and bustle.

Now, let me set the scene for you: Your sweet tooth begins to make its presence known. It hasn’t been indulged in what feels like forever. You scour the pantry, the fridge, and the freezer. The sweetest thing you find are bananas gone brown. The sweet tooth demands SWEETS. You reach the pivotal moment when you could sit back down on the couch…but the craving pushes you towards the door. And suddenly you’re outside. The air is brisk, the night sky a deep starless black amongst the lights, and you can feel the energy of the city humming around you.

As you walk, your mind begins to race. The prospect of choice looms large in your future. Do you want something chocolaty? Something gummy? Ice cream? Maybe you want to zag at the last second and make yourself sick off a large bag of Hot Cheetos (It’s worth it. It’s always worth it)? And then, the doors open, the chime sounds, and you have arrived. The modern oasis of garbage food options: the local liquor store.

In that moment, I always feel transformed. I’m a kid again. A figurative kid in an almost literal candy store. The only difference, and this is where being a grownup really pays off, is that no one is there to tell you, “hurry up and pick one.” You can browse to your heart’s content. Marvel at the advances that chocolate scientists have made! Stand in awe of what the gummy sorcerers have conjured up! Allow yourself to be dumbfounded by what the mad men at Ben and Jerry’s have concocted this time!

So, every once in a while, indulge…just for a night. Get yourself a treat or two. Being an adult is pretty miserable but every now and then, it can be as fun as you thought it would be when you were young.