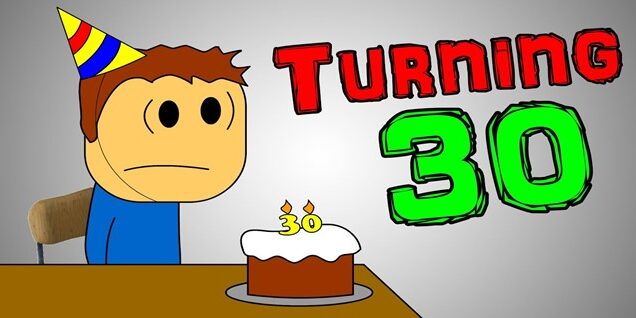 I turned 30 a couple of weeks ago and it’s left me with a strange mix of emotions: existential dread,

pining for the days when I was “young”, and a weird feeling of calm. It’s always been this number of frightening size, this self-imposed deadline constantly looming in the future, but like almost everything else in life that one dreads, it’s so much worse in your mind than it is in reality!

It goes without saying that the last “big” birthday one has before hitting 30 is 21, which marks the end of the cool-birthdays-that-let-you-do-a-sick-new-thing. At 13, the world of PG-13 movies opens to you (along with pimples, algebra, school dances…actually 13 sucks). 15 and 16 mark the times when you’re able to sit yourself behind nearly 3,000 pounds of explosion propelled metal and blast yourself onto the open road (if I think about the actual mechanics of driving a car on the freeway near other dumb humans for too long, I start having a panic attack). 18 is your entry into adulthood: cigarettes, pornography, voting, jury duty, serving in a war that was started on false pretenses before you were even born! And by 21 you can finally drink, as though kids haven’t found ways to do the things they were expressly forbidden from doing since time immemorial.

But 30 has always stuck out differently in my mind. You don’t get anything for turning 30. It’s not like they have a special kind of movie you can’t see until now, or a new kind of cigarette that kills you extra fast. In my mind, it always marked the imaginary line between young and old. And now that I’m here, that notion feels INSANE. Obviously 30 isn’t young, but clearly, it’s not old! Our last two presidents have been their 70s, Tom Brady is playing in the NFL at 44 and nobody can stop Clint Eastwood from directing and starring in movies even though he’s 91! As long as I’m younger than multiple MVP candidates, presidents, and Oscar nominees, I’m not old… even if I can’t go for a run or lift a piece of furniture or sleep in a slightly less than ideal position without hurting myself.

It’s honestly been really encouraging to turn 30. I can’t tell you how many people have reached out to tell me that “your 30s are an amazing age” or that someone’s 30s were their favorite decade. And it makes sense! So much of my 20s was spent failing at one thing or another and trying to figure out who the heck I was and what the heck I wanted to do. And that doesn’t even take into account the multiple recessions, climate disasters, and one big ole global pandemic, making it just a bit harder to get a sweet sweet slice of that American dream.

So, while I still have no delusions of being able to buy a house within fifty miles of Los Angeles, or start a family, or even fully consider myself a grownup in the next ten years, I’m still weirdly optimistic for the coming decade!

Category: Inside Will's Brain - By Will PetermanOctober 19, 2021