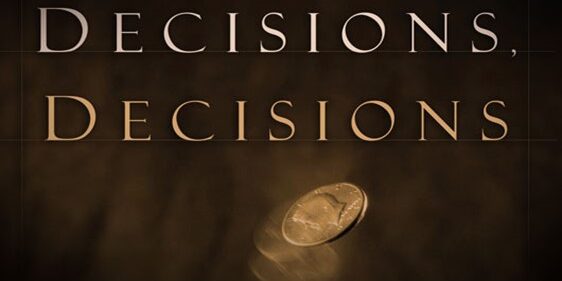 Discussions about choice and freedom are as old as history itself. From modern philosophy and religion back to Calvinism, Aristotle, and Plato, all the big wigs have pondered these existential conundrums. Are we in charge of our own choices, do we have a say on the direction and course of our lives? Is there a God (or gods) that chart our paths? Are our fates predetermined so that we merely live our lives like trains running on tracks? These quandaries have occupied many a Philosophy 101 course and kept many a stoned-out-of-their-mind young person up until the wee hours of the morn. I’ve spent time in both of these scenarios and yet have found myself no closer to solving the age-old riddle: how the hell do I figure out what to eat and what to watch?

I personally believe in freedom of will (how could I not believe in my own name?) but freedom can be a prison of its own. In a world where there are nearly limitless options on what to do, what to eat, what to listen to, what to watch, and what to play…how is anyone supposed to decide anything?!

We’ve all been in this scenario: it’s the night that you and your friend or significant other decided to go for dinner and then watch a movie. Sounds easy enough. Two big decisions and you’ve taken care of an entire evening. But, that’s where the trouble starts…where do we eat? “I don’t know, what are you in the mood for?” Uh oh…it has truly begun. Usually this leads into a discussion of what things we don’t want. Maybe last night we had Mexican and one of us had a salad for lunch, so those things are out. Maybe we’re trying to eat healthy so we want something lighter, something not too greasy. Well, more times than not we end up deciding on sushi because, obviously, sushi is the best.

Great! One decision down…and one more created. Now where to get the genre of food we’ve decided on. The decisions never end! Once the food is decided on and eaten or picked up, the next decision begins. How does anyone ever pick something to actually sit down and watch?! Not only do we have a shared list of things to watch on our phones, but we have lists of movies and shows on each of the many streaming platforms we have access to (trust me, I know these are absolutely the peaks of First World problems).

Do we watch a movie or a show? Do we check out something neither of us have seen or fall back on something we know we’ll love? Something funny or scary? Romantic or thrilling? New or old? Every answer begets more questions! Two things, food and entertainment, have splintered into hundreds of further questions straining our relationships, not only with each other but with the fabric of reality, to its breaking point! It becomes a Wimbledon level tennis volley of “I don’t care, what do you want to watch?” “Eh, whatever you want to watch.” Until we’ve been scrolling the same lists for what seems like eternity!

And then we finally settle on just watching It’s Always Sunny In Philadelphia again from the start for the thousandth time. And guess what, it’s still basically perfect.

So how do you decide something, anything? Coin flip? Random number generator? Blind fold and darts?