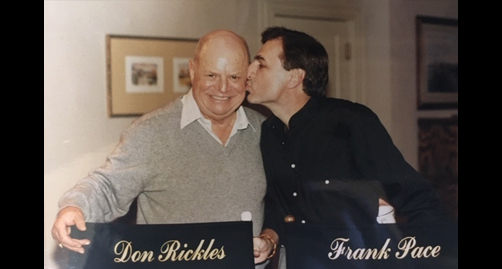 The highlight on my career was an invitation to Don Rickles 70th birthday party. It was an incredibly star-studded event, even for Hollywood.

My wife and I were seated with comic Jack Carter ,his wife and noted cosmetics maven Tovah Borgnine (wife of Academy Award winner, Ernest) plus Lorna and Milton Berle, the biggest star in television in the 50’s.  Dinner was a little slow.  When they served the bread, they skipped Milton’s.

With that, Lorna leaned over, and without asking, snagged my dinner roll.

It was pretty funny.

Another night, Berle and Forrest Tucker (of F Troop Fame) both showed up at Chasin’s restaurant.  The place was abuzz.  Legend has it that those two have the biggest dicks in Hollywood. Was this the night that Amercia would finally get its answer? Milton didn’t know what to do.  He asked his agent for advice.

“They want me to go into the men’s room and see what has the bigger dick, Forrest or me,” Mr Television said.

The agent dragged from his cigar, paused for a moment, then casually said, “Just take out enough to win.”

Don roasted the entire audience the night of his birthday, especially Scorese and De Niro who had recently shot the movie Casino with him.

DeNiro was there with his wife, a beautiful black woman.  You can imagine the slings and arrows that couple had to endure.

At the end of the dinner, they brought out the cake.  Sinatra was asked to lead the group in singing, “Happy Birthday.”

“I usually get 10G’s for doin’ somethin’ like dis,” Sinatra said.

It was absolutely perfect.

I joked to Karen, “ my career is all downhill from here.”