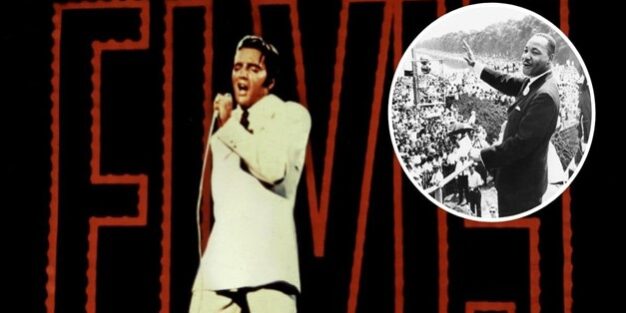 With January ending, I thought it would be apropos to reminisce about two American icons, both born in the month of January…Elvis Presley, the King of Rock ‘n Roll (born 1/8/35), and Civil Rights Leader, Dr. Martin Luther King (born 1/15/29). You might be surprised to learn of their relationship and that one of Elvis’ great songs and performances was dedicated to MLK.

As the years fly by, I’m increasingly appreciative to have grown up in the 1950s and 60s. I was fortunate to have witnessed many historic events…both good and bad.

As a young boy in the 50s, it was a simple and uneventful time for me. I was too young to comprehend the Korean War but was able to relate to war due to my father’s heroics and injuries during World War II.

The most significant happening for me in the 50s was an awakening to music, as both a musician (trumpet and later guitar) and as a fan. My parents opened my mind to music via singers like Dean Martin, Frank Sinatra, Andy Williams, Doris Day, and Perry Como. And I became a follower of Jerry Lee Lewis, Bobby Darin, Ray Charles and, of course, Elvis…the King of Rock ‘n Roll.

And while the 50s were, again, a simple time, the 60s were a far different experience. It was a decade that would change America forever. It was a shocking time in the country, especially for the young Baby Boomers’ generation (born 1946-1964) – and especially for those born in the 40s and 50s, who were old enough to understand the tragic happenings in 1963 and 1968.

For those of you not old enough to remember what happened in those years, or not a fan of history, I speak of the assassinations of President John F. Kennedy (’63), Civil Rights leader Dr. Martin Luther King (’68), and Presidential Candidate Robert F. Kennedy (‘68). Three of the most heartbreaking events in U.S. history.

I remember each of those tragic events like it was yesterday. I remember where I was…what I was doing…and the events that followed.

However, those events are for a future blog. What I’d like to discuss is Elvis, two of his heartfelt songs, and how ‘Elvis: ’68 Comeback Special’, which was produced in June of ’68 and aired on NBC-TV December 3, 1968, had ties to Dr. King.

In 1960, upon his return from a 2-year stint in the Army, Elvis took a hiatus from touring and concerts, as he focused on his acting career. However, in 1967, Elvis and his manager, Colonel Tom Parker, wanted to reboot his singing career and thought a ’68 Christmas TV Special would be an ideal format to do so. And while December remained the month for the special to air, the content strategy took a turn on April 4, 1968, the day MLK was assassinated.

While Elvis and King weren’t close friends, they did have a secret friendship (per King’s senior aide and later politician, including Ambassador to the United Nations, Andrew Young). Young confirmed that Dr. King and Elvis frequently spoke on the phone and that Elvis was also a big contributor to Dr. King’s Civil Rights Movement. This explains the reason why Elvis was so torn over King’s assassination, and why changes were made to his ‘68 Comeback Special.

To honor Dr. King, Elvis changed the final song in his ’68 special from a Christmas song, ‘I’ll Be Home for Christmas’, to a new song specifically written for the special’s grand finale. The song was ‘If I Can Dream,’ a very personal song to Elvis, which had a close connection to MLK’s ‘I Have a Dream’ speech in 1963. And while many didn’t want Elvis to sing this song, including Col. Parker, he was determined to move forward with this personally important tribute.

Have you ever watched the video of this song? If not, you’ve missed one of the greatest solos ever sung. Not only did Elvis sing it, but he also felt it. It’s a very powerful, emotional, and mesmerizing performance…and a must see.

For those of you who only think of the Rock ‘n Roll Elvis, you’ve totally missed-the-boat on his career. It was his heartfelt gospel music that was the true Elvis.

Elvis’ tribute to Dr. King and his Civil Rights Movement didn’t end with his ’68 Comeback Special. In 1969, singer-songwriter Mac Jones wrote an incredibly special song for Elvis called, ‘In the Ghetto’. A meaningful song then and NOW! When you listen to the lyrics, it’s hard to believe this song was sung in 1969…and in 2023, not much has changed, especially in Chicago.

Please, listen to these two songs (links below). You’ll be amazed how much the lyrics and performances will touch your heart.

Elvis tragically died in 1977 at the age of 42. (And, yes, I do remember where I was when I heard the news.) For those of you who were alive back then, again, I’m guessing you mostly recall the Elvis of the 50s. However, listen and watch Elvis’ songs of the late 60s and 70s. It will bring back some fond (and sad) memories of those days – and will confirm why Elvis was, truly, the King!

And for those too young to remember, or even know, who Elvis was…do yourself a favor and do some research. I love watching ‘Reaction Videos’ to Elvis on YouTube. Many kids are amazed how great a singer Elvis was – and are surprised by some of the beautiful and meaningful music he sang.

God, I’m so grateful to be a Baby Boomer!

If I Can Dream: https://www.youtube.com/watch?v=u-pP_dCenJA