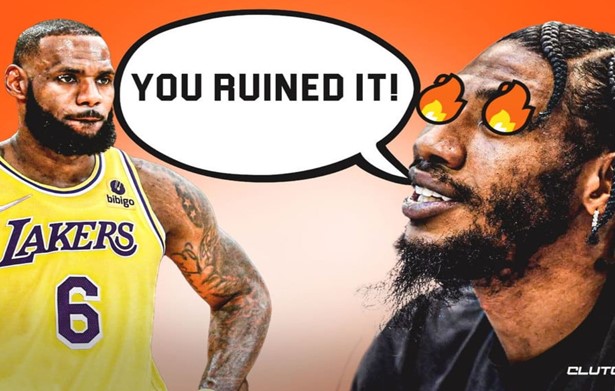 In a sports sense, I hate the LA Lakers. I’ve been a Boston Celtics fan since the days of Bill Russell, so…enough said.

However, while I dislike the organization, that doesn’t mean I haven’t respected them over the years. The Celtics-Lakers rivalry is one of the best in all of sports. Plus, I actually liked Jerry West and Elgin Baylor. Both were great players and classy men. And while I was never a fan of Kareem, Magic, Shaq or Kobe, their talent was undeniable, as was their character.

Also, while I acknowledge the Lakers’ organization is tied with the Celtics with 17 NBA Championships, I will remind everyone that the ‘LA’ Lakers can only boast of 14 Championships. The other 3 came as the Minneapolis Lakers. The Lakers moved to Los Angles in 1960.

So why is one of the great organizations in all of sports allowing one player to tarnish their legacy?

LeBron James is not a true Laker. He’s a pompous, egotistical human being who is using this organization for his own personal gains. Wake up Jeannie Buss!  Your late husband, Jerry, is rolling over in his grave watching LeBron tarnish all he did to build this great franchise.

It’s normal for NBA fans to dislike opponents. Most fans despise great players who hinder their team’s chance of winning a game or championship. However, when the game is over, most players and fans go their separate way. But in today’s world of social media, those feelings now have a new platform to promote hate. And it appears to me, if a player is going to play the social media game, they escalate and perpetuate the hate themselves.  And no one plays the game better than LeBron. Every time he opens his mouth, he creates controversy.

Personally, whatever James says to aggravate fans is irrelevant to me. I don’t give two sh_ _s! That is, until he gets into commenting about the country. When he puts on his political, hate America hat, I really get pissed off!!  He’s a billionaire capitalist who puts down America, while he sucks up to Communist China and their suppressive ways. But that’s a blog for another time.

The LA Lakers have won their 14 championships by promoting a ‘team’ concept. Even with some of the NBA’s greatest superstars leading the way, it was almost always about the team.  From West and Baylor to Magic and Kareem, it was about the Lakers organization. Even Kobe was mostly a team guy. (Notice that I said ‘mostly’ about Kobe.)

The minute the Lakers signed LeBron, it just gave NBA fans another reason to hate them. And, sadly, non-Laker fans now also disrespect the Lakers. To bring this narcissist into your organization has ruined the Lakers’ image.

Bring back the likes of Jerry West, Elgin Baylor, and Magic Johnson….true Lakers!

Money Consumes (and Ruins) Sports Dialog
by Gil Vieira
August 23, 2022
Blog & News Posts
Blog & News Category
Go to Top
We use cookies on our website to give you the most relevant experience by remembering your preferences and repeat visits. By clicking “Accept”, you consent to the use of ALL the cookies.
Do not sell my personal information.
Cookie SettingsAccept
Manage consent