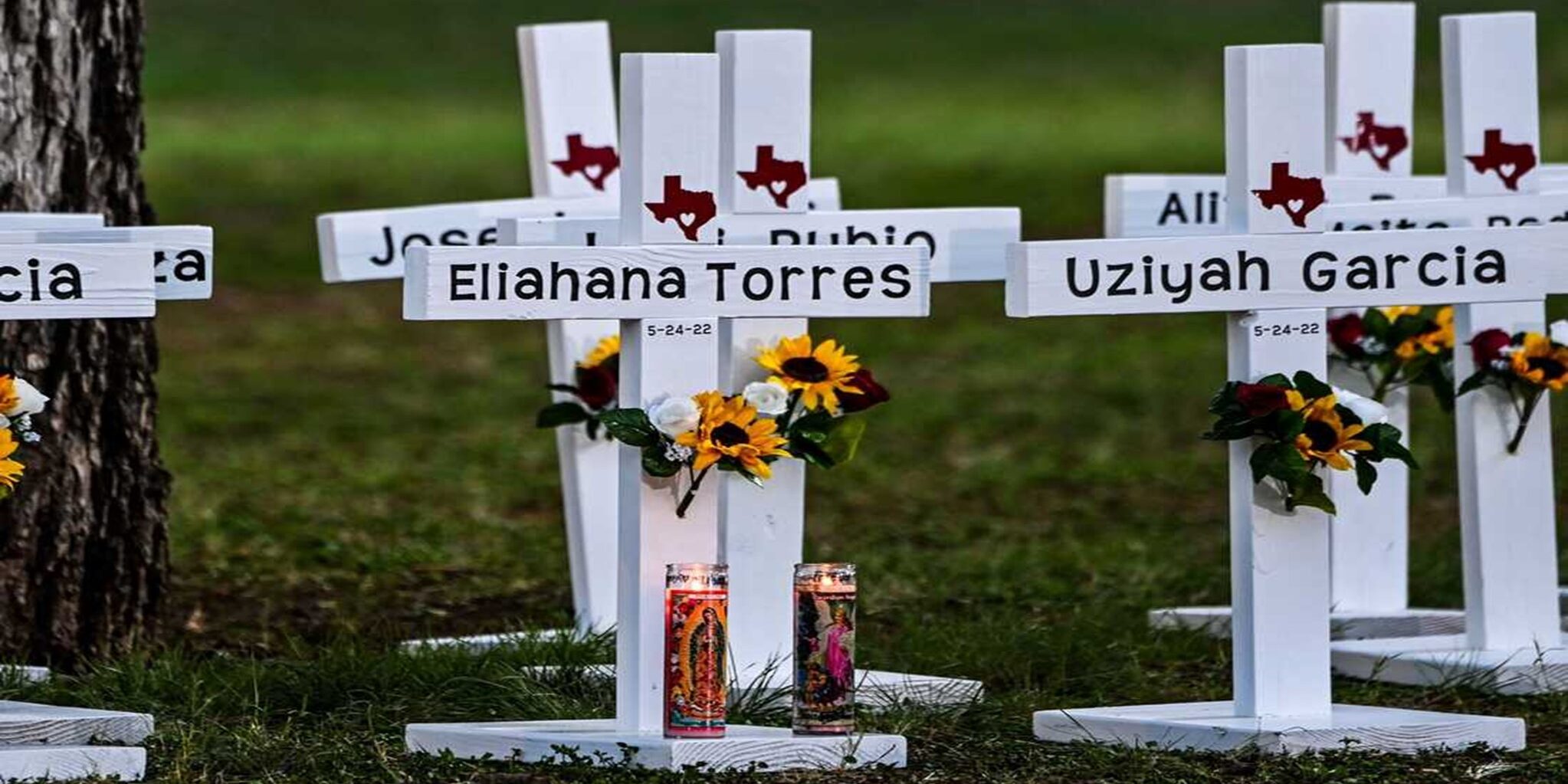 I spent one terrific Memorial Day, poolside, surrounded by my family, eating bbq and watching my two granddaughters play as if they didn’t have a care in the world because they didn’t.

In Uvalde, Texas, however, 21 families and an entire community suffered the realities of life as we have come to know it.  Nineteen precious children and two brave teachers’ lives were snuffed out in yet another senseless mass shooting. This tragedy came only a week after another horrific mass shooting had occurred in Buffalo.

According to CNN, here’s a timeline of the events from Uvalde that day:

“On Tuesday, May 24, at 11:27 a.m., the video showed Robb Elementary school exterior door, where the shooter apparently entered, was propped open by a teacher.

At 11:28 a.m., the shooter’s vehicle crashed into a ditch near the school. A teacher ran into a room to secure a phone and quickly returned to the exit door, which remained propped open.

The suspect jumped out from the passenger side of his truck with a rifle and a bag, which officials later said was ammunition.

Meanwhile, two witnesses who were at a funeral home across the street from the school had heard the crash and ran to see what happened. When the suspect began firing at them, the two naturally bolted.

At 11:30 a.m., a teacher re-emerged in a panic and called 911, (In a separate statement, the US Marshals Service confirmed that it received a call for assistance at 11:30 a.m. from a Uvalde Police Department officer).

At 11:31 a.m., the suspect reached the last row of vehicles in the school parking lot and began shooting at the school. About this time, patrol vehicles started to arrive at the funeral home

The school resource officer then drove right by the actual shooter who was hunkered down behind a vehicle. Multiple shots were then fired by the suspect.

At 11:33 a.m., the shooter entered the school and began shooting up a classroom, which was connected to a second classroom. He fired at least 100 rounds.

At 11:35 a.m., three Uvalde Police Department officers entered through the same door as the suspect. Another three Uvalde police officers and a county sheriff followed for a total of seven officers on the scene. The three initial officers went directly to the classroom door, which was bolted shut.  Two officers suffered grazing wounds from the shooter.

At 11:42 a.m., a source close to a teacher received a text saying there was an active shooter on campus. CNN saw the text chain and confirmed the timestamps.

At 11:43 a.m., Robb Elementary announced on Facebook a lockdown due to gunshots in the area and added that the students and staff were safe in the building.

Also, at12:03 p.m., a young girl from inside one of the adjoining classrooms called 911 and identified herself.  She whispered the room number of the classroom she was in. Her call lasted a minute and 23 seconds. She called back several minutes later and said multiple people are dead.

At 12:10 p.m., the first group of deputy US Marshals arrived on the scene to assist the Federal, state and local law enforcement already.

When Border Patrol agents arrived, the officer in charge had already made the determination that it was a barricaded subject situation and not an active shooter incident. The team then decided to wait and to not breach the classroom the shooter was holed up in until nearly 40 minutes later.

At 12:17 p.m., Robb Elementary announced on Facebook that there was an active shooter at the school and authorities were on the scene.

At 12:16 p.m., the girl called 911 again and told dispatchers there were eight or nine students alive.

At 12:19 p.m., another person called 911 from one of the two classrooms and hung up after another student told her to.

At 12:21 p.m., the suspect fired yet again from behind the door. Law enforcement moved down the hallway.

At 12:36 p.m., the initial student who called 911 called still again. She was told to be very quiet and tell the dispatchers the classroom door number. This call lasted 21 seconds.

At 12:43 p.m., the young girl begs dispatchers to please send the police now.

At 12:47 p.m., the student asked again for the police.  Only a minute earlier, she had said she could hear the police next door.

At 12:50 p.m., law enforcement breached the locked classroom door using keys from a janitor. They finally shot and killed the suspect.

At 12:51 p.m., through the young girl’s 911 call, there were loud noises, and officers could be
heard moving children out of the room. The child went outside and the call cut off.  (She was one of the lucky ones.  She escaped with her life)

The suspect had purchased a total of 1,657 total rounds of ammunition.  At least 315 of which were dispensed inside the school.

Reports originally said there was an armed guard at the school. That was inaccurate. For 77 minutes police were inside the school before they broke the door in and killed the shooter. 77 MINUTES?

Imagine the horror that went in those elementary school classrooms in those 77 minutes. What were the police doing?

I was watching ABC’s “This Week with George Stephanopoulos” Sunday, and one of the guests was the former Department of Homeland Security — a Counterterrorism expert. Chief John Cohen said that the shooter should have been controlled or killed within five minutes of law enforcement entering the building.

My partner, Billy O’Connor, a New York City Fireman and first responder who has run into hundreds of fires, said the same thing. “When there are kids’ lives at stake, we just do our jobs. We knew the chances we were taking when we signed up. No one gives a shit about our own lives. We have to save those kids. If one of us dies in that pursuit, at least we would have died honorably.”

There is so much blame to go around in Uvalde that it makes your head spin. If only the police had done what they had been trained for. In the most defining moment of their lives….they failed.

On Memorial Day we honored the brave men and women who gave their lives to protect this country. I wish just one of them could have been in Texas that day.

Now, instead, an entire nation grieves for the two brave teachers and the 19 young lives who will
never see their families or experience all the joy life offers.