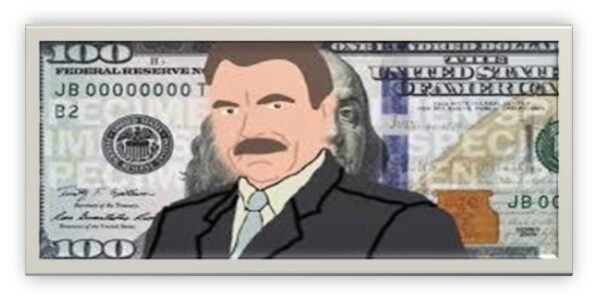 (The following is an excerpt from the book, IF THESE LIPS COULD TALK, by Frank Pace with Billy O’Connor)

An internet meme of Howard Cosell with his arms around Bruce Jenner and O.J. Simpson reads, “Folks, I’ve just looked 50 years into the future.  You’re not gonna believe what I have to tell you.”

America’s fascination with celebrities has reached epic heights.  Hell, we elected two reality-TV stars President.  Running for President is one talent, actually doing the job is another.

Celebrities promote prescription drugs on TV whose side effects “may cause death.”   The Kardasian’s silly series garnered the highest ratings in cable television history. When Andy Warhol said, “Everyone will be famous for 15 minutes.”  He got it wrong.  He should have said; everyone will be famous for five.  Warhol confused fame with celebrity, commotion with accomplishment.

Barack Obama is famous…Paul McCartney is famous.  Chrissy Teagen is a celebrity… the musical group BTS are celebrities.  Monica Lewinsky was infamous, but still a celebrity.

Celebrity is like a David Blaine illusion.  Maybe it seems real, but perception shouldn’t be confused with reality.  Sort of like those diamond-like trinkets Joan Rivers used to sell on the Home Shopping Network.

Some celebrities are famous, like Tiger Woods and Bruce Springsteen. They are accomplished people who also court and embrace the limelight.  That’s the catch with celebrity and those who buy into it.  It’s a full-time job, one that needs to be fed and nurtured.  To many, it is like a drug that coursing through their veins.  Like any addiction, the need for it often becomes all consuming.

Many who have fame thrust upon them are never comfortable with its accompanying demands.  Ultimately, they learn to grudgingly co-exist with it, or like Greta Garbo and J.D. Salinger, they withdraw completely.

For others it’s a curse.  All Charles Lindbergh ever wanted to do was fly an airplane across the Atlantic.  Fame would cost him a son.

Bob Dylan ran away from fame to Woodstock.  He didn’t want to be a spokesperson for a generation.  He just wanted to make music.

In July 1969, Buzz Aldrin became famous when he walked on the moon.  In the ensuing 40 months, ten other men would follow in his footsteps.  In the years after their return to earth, Aldrin and most of the others underwent uncommon depression.  I once asked Aldrin over dinner why so many of the “moon men” had suffered so many personal problems.  “It’s simple,” he said. “NASA prepared us for everything that could happen on our way to the moon but for nothing that would happen when we got home.”

In short, they could not deal with the celebrity that fame brought with it.

Fame is also fickle.  Disrespect it, and it can break you as quick as make you.  Pete Rose, Mike Tyson and Bill Clinton thought fame entitled them to play by different rules.  They thought their fame would protect them.  Instead it brought them shame.  Hall of Fame basketball player Charles Barkley once said, “I ain’t nobody’s role model.”  Barkley was lambasted for the statement, but the truth is, he was right.  The same goes for hero worship.

Some years ago, I ran into Bruce Jenner at Musso & Frank’s Restaurant, a legendary Hollywood watering hole supposedly still frequented by the ghosts of past patrons Humphry Bogart and Errol Flynn.  I was surprised and saddened by Jenner’s appearance.

Plastic surgery had transformed him into a porcelain, Michael Jackson looking freak.  It was a desperate attempt by Jenner to stay youthful looking and maintain whatever tenuous hold that celebrity still accorded him.  And, he was still a man then.  Little could I have guessed the sordid, celebrity-play that he was starring in behind his façade.

Opposites always attract but electricity can often wane.  Caroline Kennedy rarely appears in public, but the late John Jr. was on Murphy Brown.  It doesn’t make one-person right, or the other wrong.  Living in a fishbowl just forces you to make choices.

I’ve been around famous people and celebrities my entire adult life.  From John Wayne and Frank Sinatra, to Sabrina Carpenter and Zendaya.  I’ve been with some on their way up, many at the height of their fame and celebrity, and others after their star has faded.  One thing I can tell you is that almost unanimously, they really have no interest in being anyone’s role models.

So, why do you care?  Why would you care if Ben Affleck dumped Jennifer Lopez or Jennifer dumped Ben?  Why do you care that Jennifer divorced her second husband after 10 minutes and was engaged to Alex Rodriguez?  Have you ever seen two bigger celebrity whores?  And now, low and behold Jennifer and Ben are back at back together.  Who would have ever guessed?

It started when George Murphy, an actor in the 30’s, was elected Senator in California.  It led to Ronald Reagan being elected Governor, then President.  Jesse “freaking” Ventura was elected Governor of Minnesota. Then Arnold Schwartznegger the Governor of California. Finally, Donald Trump of all people, the host of The Apprentice and Celebrity Apprentice, was given the keys to the White House.

Don’t be enticed by fame or celebrity.  Don’t refinance your house because Tom Selleck was paid to make a pitch for reverse mortgages.  You’re smarter than that. Instead, ask the question, how much money does Tom Selleck need?

I remember my parents’ generation being seduced to smoke cigarettes by the macho image of the Marlboro Man.  He was the guy every woman wanted, and every man wanted to be.  Well thanks to those cigarettes, the actor who portrayed the Marlboro Man died a slow, agonizing death from cancer, as did many of that generation.  Today, cigarette ads are banned from TV, and the networks forbid us from even allowing an actor to light up on camera.

Remember this about celebrity; it’s like poison.  It can’t hurt you if you don’t swallow.