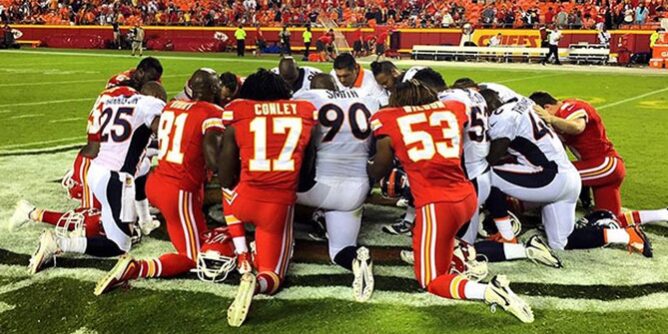 As I watched the recent horrific happening on Monday Night Football regarding Bills’ player Damar Hamlin, I was touched by the two emotions that evolved during that life-or-death situation. They were emotions that I also experienced while watching…both heartbreaking and heartwarming moments.

The way Damar went down and the immediate reaction of the players, one knew this was a serious issue. It was heartbreaking to watch. However, as time elapsed, it also became heartwarming watching how both his teammates and opponents reacted. Watching them surround Damar and kneel in prayer brought back many memories of how playing team sports helps build character.

And when I use the word ‘character’, I mean ‘the mental and moral qualities distinctive to an individual’.

There’s a quote associated with one of my all-time favorite coaches, John Wooden – the former iconic basketball coach of the UCLA Bruins. His quote goes like this…

“Sports do not build character, they reveal it.” – John Wooden.

I couldn’t disagree more with the legendary coach.

I started playing team sports as a young boy. In my pre-teen years, I played organized baseball and basketball. I was too big to play Pop Warner Football but played it often in the sandlots. However, it was in high school, when playing all three sports, that it really began to help me develop life skills.

Did I know this was happening in real time? No, not in the beginning. However, by the time I reached my junior year in high school, I began realizing that sports were helping me develop as a young man.

Playing team sports helped me develop the following life skills, which assisted me during my life:

And of the three sports I played, it was football that provided the most character building.

Football is a tough and brutal game – and those are key factors as to why it had such an impact on my life. Banging bodies with teammates all week then coming together to compete against an opponent built a special comradery among us. Every week, we practiced hard to improve as a team and individually – and we did so as many fought through injuries and pain.

As I gave thought to writing this blog and looked back on my football days, I couldn’t help but recount the numerous injuries that I suffered playing the game. You need to love football and understand the positive impact it has on your life to keep playing after injuries – many of which I played through, and some which still have an effect on my life today. Here’s my list:

Unless you’ve played the game, you probably can’t understand why one would continue to play after so many injuries. It wasn’t only the love of the game, but also the friendships and respect you build with your teammates, plus the realization of the positive impact the game has (and will have) on your life.

And here’s the truth…as a college graduate, I can tell you that I learned more about life playing team sports than I ever learned from any book!

So, with all due respect to Coach Wooden…while sports do reveal character, it also helps build character.