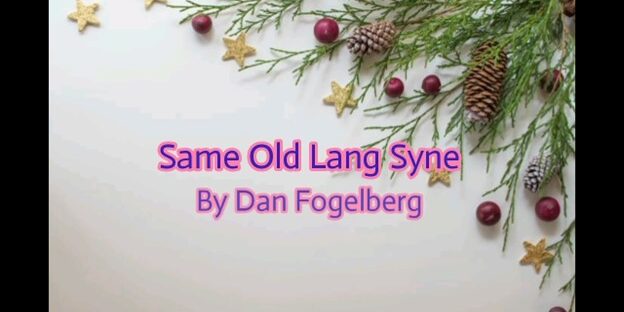 I’m a very sentimental person. Always have been. Always will be. New Year’s Eve is often a wistful time, not a raucous time for me.

I can’t wait for a better year next year, but aside from the song “Auld Lang Syne”, which is a Scots-language poem written by Robert Burns in 1788 and set to the tune of a traditional folk song, we have very few, if any, memorable New Year’s Eve songs.

But one song gets me every year, even if it’s NOT New Year’s Eve. It’s a song written and performed by the late Dan Fogelberg and is called “Same Old Lang Syne”…and I always thought it was Dan’s very best composition.

And it comes from a TRUE STORY:

In 1975, Fogelberg returned to his parents’ home in Peoria, Illinois for Christmas Eve. To make Irish coffee, Fogelberg went out to buy whipping cream.

Meantime, his high school sweetheart, Jill Anderson, also had returned home to visit relatives. At the request of her mother, she headed out to buy eggnog.

With almost no stores open that night, both happened to arrive around the same time at a convenience store. After running into each other inside, they split a six-pack in her car while getting caught up on each other’s lives, then went their separate ways. Five years later, the serendipitous meeting was recounted by Dan in “Same Old Lang Syne.”

It took Dan 5-years to release the song, with nearly a word for word narrative of what really happened in his life. The two never reunited romantically.

Dan Fogelberg was one of my favorite singer-songwriters. He wrote with sentiment and heart, which appealed to me. I once had a corporate show, where I opened for Dan and wanted to tell him how much I admired him and his work. I didn’t want to bother him before the show, so I figured I’d meet him after his show.

I did my show and sat in the audience to watch his performance. However, by the time I got backstage, he had left. I never got to tell him.

Dan Fogelberg died in 2007 from prostate cancer. He thought he had beaten it, but he didn’t.

I always regretted not telling Dan what I thought of his music, but like “Same Old Lang Syne”, fate has a way of dictating the memories of life. And every time I hear this song, it makes me very, very, wistful. If you have someone or something in your life that inspires and moves you…don’t wait, don’t delay. Tell them what you feel.

I always loved this song and what it says. On New Year’s I play it…a lot.

“We drank a toast to innocence

We drank a toast to now

And tried to reach beyond the emptiness

But neither one knew how

We drank a toast to innocence

We drank a toast to time

Reliving in our eloquence

The beer was empty, and our tongues were tired

And running out of things to say.

She gave a kiss to me as I got out

And I watched her drive away.

Just for a moment, I was back at school

And felt that old familiar pain

And as I turned to make my way back home

The snow turned into rain”

Dan Fogelberg has been gone for 15 years, and I miss him. I miss the innocence and his eloquence.

Here’s to better days, and a better year ahead.

And I drink a toast to YOU, Dan!

The Best Christmas Song Ever
by Roy Firestone
December 20, 2022