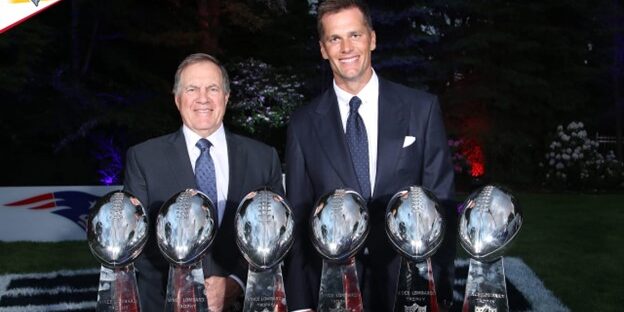 Born and raised just south of Boston, I’ve been fortunate to see three of the greatest pro sports dynasties ever in person – the Boston Celtics, New York Yankees, and New England Patriots.

From Bill Russell’s Celtics of the 50s-60s and Larry Bird’s Cs of the 80’s…to the Mickey Mantle led Yankees of the 50’s and early 60’s and Jeter’s Yanks of the 90s, I was blessed to see all those great teams in person.

And while it’s difficult for fans to see their dynasty end, none has been more painful to watch than the recent demise of the New England Patriots.

Yaa-Yaa, I hear all of you Patriots’ haters…you love it. That’s fine. Most fans hate great organizations that aren’t theirs. But you should at least have some respect. As a Red Sox fan, I hated those great Yankees’ teams. However, I did respect them, understood their greatness, and enjoyed the rivalry.

The Patriots have been a dynasty for two consecutive decades, so it has been especially painful to watch their recent failures. During the Brady years, the Pats played in half of all Super Bowls (9 in 18 years). Of the 9, they won 6. During that time, they had winning seasons every year, and won 17 Divisional Titles. The only Divisional Title lost during that time they tied for first, losing only to a tiebreaker. In addition, they appeared in 13 AFC Championships – and 8 in-a-row from 2011-2018.

They are, indeed, the greatest dynasty in the history of the National Football League – and one of (if not the) greatest in all pro sports.

After the asinine split with Brady, Pats fans knew it was over. However, what we didn’t expect was the absolute failures of Belichick and his terrible coaching staff. Watching the blunders week after week certainly has put to rest the real reason for the Pats dynasty. Tom Brady.

While I’ve never been a huge Bill Belichick fan, he certainly deserved praise for much of the team’s success. Despite his arrogant mannerisms and hatred for the media, his football knowledge was never questioned. However, it is being challenged today. That, coupled with the fact that his NFL record as a head coach without Brady is below .500, is tarnishing his accomplishments. With Brady as his starting QB, Bill’s winning percentage is .774!

At the time of this writing, it appears the Pats will not make the playoffs this year. No big deal, as they’d likely be one and done anyway. However, better to get in and lose than not to get in at all.

The Pats not getting into the Playoffs makes the demise of this great dynasty hurtful…and final.

Thanks for the memories!