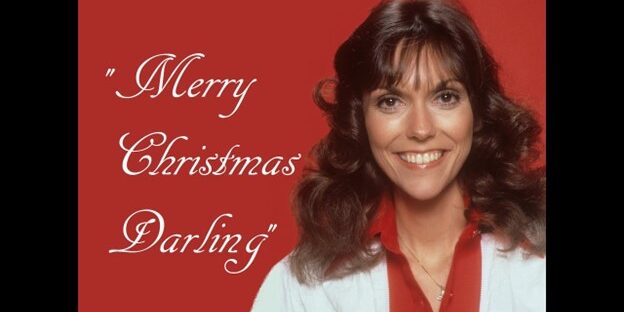 The best Christmas song and vocal was recorded more than 50 years ago and its back story is like a Hallmark Channel movie. And it really happened.

Frank Pooler was the choir director at Cal St. Long Beach. In 1946, just after the war, he was stationed in Germany and during the holiday season, he missed his fiancé. So, Frank wrote a poem longhand called “Merry Christmas, Darling”. It had NO melody.

Frank and his fiancé would NOT marry, and Pooler married another woman who passed away many years later. One night, long after that, Pooler was eating dinner at a local restaurant (he did not eat at home much after his wife passed). He said he was sitting there eating and he noticed an older lady eating across the dining hall from him. He said she looked familiar and asked her name.

She told him and it turned out that she was his old sweetheart, who he was engaged to during WWII.

They both could not believe it.

Needless to say, they had dinner together that night, and he proceeded to tell her the story about the song Merry Christmas, Darling – and that the song was based on a letter that he wrote to her when he was lonesome at Christmas in Germany. He said she was speechless and they both, with a tear and a smile in their eyes, finished dinner.

Richard Carpenter was a student at Cal State Long Beach in 1966, and Pooler, his choir teacher, told him to write a melody for the poem he had written 25-years ago. At the time, Richard was just 19 years old.

Carpenter wrote the melody and had his sister, Karen, sing it…and the rest is history. It was recorded in 1970, when Karen was just 20 years old.

This song, “Merry Christmas, Darling,” particularly the vocal, is one of the great holiday songs ever.

To me, next to “Superstar”, it is Karen’s best recorded vocal. It has been a number one Christmas single in THREE different decades. I love it as much as Nat King Cole’s, “The Christmas Song”.

We remember Karen every Christmas via this song. But little did we know that it comes with such a romantic backstory.

Merry Christmas, Darling. You can’t sing a song better than this.

Drink a Toast to Innocence
by Roy Firestone
January 2, 2023