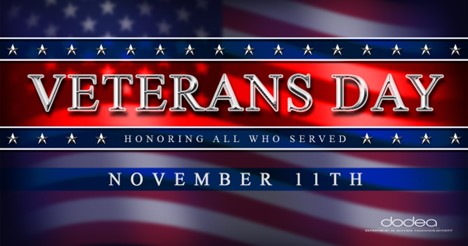 With Veteran’s Day approaching, many emotions run through my head and heart.

As a grateful Baby Boomer, I’ve witnessed, firsthand, the trials and tribulations of being a veteran, specifically war veterans of World War II and Vietnam. Those two wars played a significant role in my life.

For those who read my blog, you know that my dad was a WWII Veteran who paid a heavy price serving his country. As a paratrooper during the Normandy invasion, he lost an eye and lived with shrapnel in his body for his entire life, causing him a great deal of pain for years. I remember hearing him suffer in bed every night for much of my youth.

My parents and their generation were called ‘The Greatest Generation’…and rightfully so. The greatness of their sacrifices and loyalty to America were second to none.

In the early 50s, several family friends served in the Korean War. Having just been born, Korea didn’t affect me, personally, but I know it took its toll on many friends of my parents.

However, the Vietnam conflict was different. It was a very personal and emotional time for me.

In March of 1967, while in high school, Vietnam hit home, as I lost a friend in Nam. In memory, there’s a street named after him in my little New England hometown. And soon thereafter, another war eye injury occurred…

My best friend, who was serving in the National Guard, was called to serve in Vietnam. He was like a brother to me – and my dad was like a father to him, as he lost his dad at an early age. During a raid, he was hit in the face and lied on the ground fighting for his life and thinking he, too, may lose an eye. He told me that during that frightening time, all he could think about was my (our) dad. He stated it was dad who helped pull him through that horrendous event. Luckily, he didn’t lose his eye, but was left with a facial scar under the eye, not to mention the emotional scar with which he lives to this day.

For me, I was fortunate to get a college exemption and landed the number 319 in the first Vietnam Draft Lottery. There were times back then when I felt guilty for not serving. How and why was I so lucky? Maybe ‘The Man Upstairs’ felt our family had suffered enough.

So, whether you’ve experienced a veteran’s life firsthand or not, be sure to take a moment on November 11th to recognize and say a prayer for all veterans…and be thankful for their service and sacrifices.

No one in this great country deserves more thanks than our Veterans.

God bless them all!

Remembering Bill Russell – The Greatest Sports Champion Ever
by Gil Vieira
August 3, 2022
Blog & News Posts
Blog & News Category
Go to Top
We use cookies on our website to give you the most relevant experience by remembering your preferences and repeat visits. By clicking “Accept”, you consent to the use of ALL the cookies.
Do not sell my personal information.
Cookie SettingsAccept
Manage consent