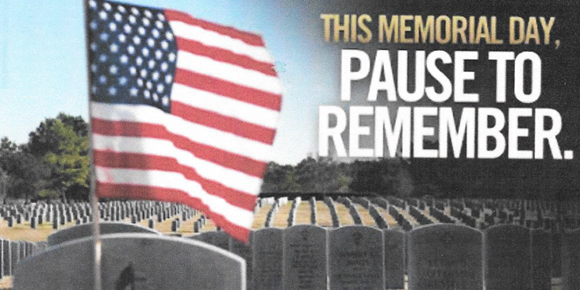 As the son of a World War II veteran who is extremely proud to showcase Dad’s Purple Heart on my fireplace mantle, I remind everyone that Memorial Day is a very special day for Americans. It’s a day we honor those who died while serving in the U.S. military in our nation’s wars. As my Dad would always remind me, Veterans Day is for ALL who served, but Memorial Day is to honor those who made the ultimate sacrifice for our country and freedom.

However, I also believe that after a war veteran passes away, he/she should also be memorialized for services rendered.  Every Memorial Day, my Dad’s gravesite is visited by family and honored with a new American flag.  As I’ve mentioned in a Father’s Day blog, my Dad lost an eye in WWII, and lived with much pain for a number of years following his injury. Hence, a special ‘thank you’ on Memorial Day is the least I can do. He was a very special man and father.

Originally known as Decoration Day, it originated in 1868 following the Civil War. For those too young to remember, Memorial Day was observed on May 30. But in 1968, Congress passed the Uniform Monday Holiday Act, which established Memorial Day as the last Monday in May in order to create a three-day weekend.

No matter the day, I just pray that all Americans remember the true meaning of this very special day. It is NOT ‘Barbeque Day’ to celebrate the unofficial beginning of summer. And it’s not just another long holiday weekend for you. It’s a day to honor those who made the ultimate sacrifice in war, so you could have the freedom to enjoy your rights as an American.

And please remember, each year on Memorial Day a national moment of remembrance takes place at 3:00 p.m. local time. So, whatever you’re doing, be sure to set your phone for that time and take a moment to pause and give thanks.

And no matter what the haters say, remember that we live in the greatest country ever – thanks to all Americans who paid the ultimate price.