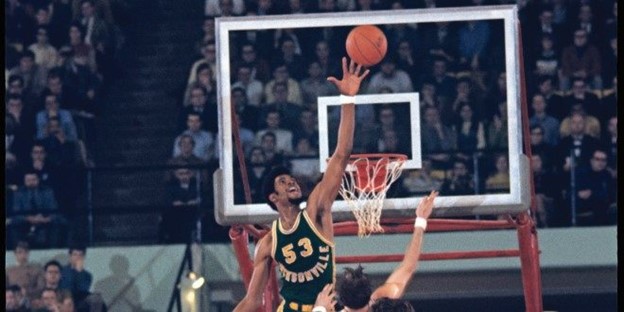 Watching the recent NCAA Final Four, plus knowing UCLA basketball great, John Vallely, would be a guest soon on the ‘A Mick A Mook and A Mic’ podcast, ignited many fond basketball memories.

It was in March 1970 when my favorite NCAA basketball memories occurred. Over 50-years ago…yikes!

I was a sophomore in college. God, just a baby!  I was attending Jacksonville University (JU) in Florida – and finally getting over being homesick. Living south of Boston and being part of a close-knit, loving family and residing in a picturesque, historic, seaside New England town, made my first year away from home difficult. However, as my sophomore year began, it became more and more enjoyable – and I remember the exact day everything at college changed.

It was 1969, a few days before classes were to begin. I was sitting at my desk by the window in my dorm room watching the kids roll onto campus. I had a corner room on the top floor (4stories) right across from the girl’s dorms. A wonderful view!  All of a sudden, coming out of the cafeteria was a very tall guy. I later learned he stood 7’2” tall!

It was my first visual of the soon to be legend, Artis Gilmore.

As the school-year progressed, students quickly realized that this would be a special and fun year. Personally, I quickly began regretting giving up my JU basketball scholarship to play baseball. But that’s a story for another time.

For those not overly familiar with basketball, Artis Gilmore became one of the greatest centers to ever play the game. He was inducted into the Naismith Basketball Hall of Fame on August 13, 2011. Fortunately, I was able to attend – and wouldn’t have missed it for anything. You see, Artis and I were fraternity brothers at JU and remain friends to this day. And as I always say, as great of a basketball player Artis was, he’s even a better person. He truly is a ‘Gentle Giant’, as we often called him.

As the season unfolded, many of us felt that the team could be special. With a great cast joining Artis, including a future member of the Boston Celtics, Rex Morgan, we were 6-0 at the Christmas break. While home during the break, I actually told my former high school basketball coach that JU would be undefeated and in the Final Four. I told him we’d be playing UCLA in the Finals. He laughed!

Well, I wasn’t right about going undefeated, as JU lost to the Dave Cowens-led Florida State Seminoles in January at the infamous Tully Gym in Tallahassee.  JU later revenged that loss by beating Cowens at home to run its record to 20-1. The regular season record ended at 23-1, and we were ranked #4 in the country by the Associated Press prior to the start of the NCAA Tournament.

So on to the 1970 March Madness for JU – the tiny private school who many thought had no business being in the tournament. As a matter of fact, billboards around the Mideast Division host city of Columbus, OH read: Jacksonville Who?

Needless to say, that statement infuriated JU students and fans, but it only inspired the team even more.

In the regional division, JU went on to defeat #12 Western Kentucky, #7 Iowa, and then #1 ranked Kentucky Wildcats, with star center Dan Issel and legendary coach Adolf Rupp. The win over Kentucky advance JU to the Final Four. It was the sweetest victory of the year.

The 1970 Final Four was played at College Park, Maryland – just a few miles outside of D.C.  Back then, the semi-finals were played on Thursday night, with the Finals played late afternoon on Saturday. Joining #4 ranked JU at The Final Four were #5 New Mexico State, #3 St. Bonaventure and the #2 UCLA Bruins, who were the reining NCAA Champions.

Fortunately, with the first game on Thursday, JU allowed students to miss Thursday and Friday classes without it affecting their attendance record.  So, we loaded up the car on Wednesday, and after classes, we took the 10-hour drive up to D.C.  And, believe me, the ride was one to be remembered. Just making it there was half the battle. Oh…those college days!

In the semis, JU was slotted to play St. Bonaventure with their burley 6’11” center, the great Bob Lanier.  Everyone was looking forward to the Gilmore-Lanier matchup, as they were rated the top two college centers in the country.  But, unfortunately, it wouldn’t occur, as Lanier injured his knee in the regional finals and didn’t play.  Artis would go on to dominate the game in a JU win with 29 points and 21 rebounds.

The lead up to this game was amazing.  The JU campus was high as a kite for the entire month of March. The celebrations and ongoing party-life was more than I can even explain. It made spring break look like a church gathering.  It was a time that, I’m sure, was never experienced again on the JU campus.

The game started out great, as the JU contingent began its chant: “We beat #1 (Kentucky), we can beat #2!” (UCLA).  JU led most of the first half until UCLA legendary coach, John Wooden, called a time out and changed his defense on Artis.  He switched to a man-to-man/zone combo, with stars Curtis Rowe fronting Artis and Sidney Wicks playing behind Gilmore. It worked to perfection with multiple Wicks blocked shots on Artis, albeit some incredibly bad non-calls.

To the admission years later by some UCLA players and Wooden, himself, the blocked shots by Wicks on Artis were, indeed, goaltending. Sadly, there was no dunking allowed in college hoops back then, so Artis often shot a little sky hook – and Wicks blocked a few of them that changed the momentum of the game.

Years later, opponents admitted that when Artis shot his little hook, the ball was on its way down as soon as it left Artis’ hand and, thus, would automatically be goaltending if blocked!

And here’s another little tidbit that pissed JU fans off: the free throw disparity. UCLA shot 35 foul shots, while JU shot only 8!  And Artis, who would always be man-handled, only shot 1 free throw the entire game!

So, was the ‘fix’ in?  Here are some quotes from the memoirs of then JU Assistant Coach, John Wasdin:

Wasdin, in his memoir, “Once a Coach, Always a Coach,” written with award-winning Florida-based sportswriter Peter Kerasotis, claims that “the message we got was that we weren’t going to win because the officials weren’t going to let us. The Establishment didn’t want it. Our chances were very thin.”

But why? “Jacksonville,” Wasdin says, “was considered a renegade program that didn’t conform to establishment rules. The Dolphins wore “Afro” haircuts and warmed up before games to “Sweet Georgia Brown,” the song associated with the Harlem Globetrotters.”

So, after 52-years, many still believe our beloved JU got robbed, as the “fix” was, indeed, in!

But that aside, it was one helluva ride with many, many great memories.