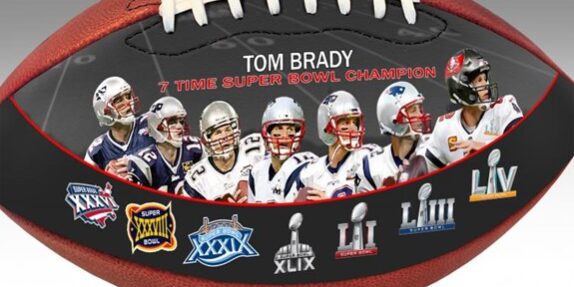 Beginning with Super Bowl XXXVI, played on February 3, 2002, Tom Brady (The GOAT) has played in ten!  Yes, that’s right…10!  It’s hard to believe that 50% of all Super Bowls played since that memorable upset of ‘The Greatest Show on Turf’ (St. Louis Rams), have showcased Tom Brady.

For the past twenty years, the ‘Brady Bowl’ became almost an annual event. So, it’s no surprise as to why the Patriots and Brady were so hated outside of New England. In sports, Americans dislike winners and love the underdog. In Brady’s 10 Super Bowl appearances, in which he won 7, he was the underdog twice – the first one in 2002, and his final appearance in 2021 versus the Kansas City Chiefs. He won both.

I remember during the early years of the Patriots dynasty, the question was…who is better, Brady or Peyton Manning?  After that was settled, the comparisons moved on to the great Joe Montana. That took a while to subside, but after Super Bowl win #5, that ended, too.

Then, of course, there was the idiotic and embarrassing comment by ESPN’s Max Kellerman in 2016, who stated that Brady was “About to fall off a cliff.”  Well, four Super Bowl appearances and three victories later, Max had to finally admit he was wrong. Ya think, Max?!

So for all those ongoing haters still living in denial regarding TB12 being The GOAT, check out these amazing All-time and Post-Season stats, in which Brady ranks FIRST:

(Note: Stats were derived from buccaneers.com)

And to think, I was fortunate to see every one of those stats in real time. In Brady’s long, illustrious career, I watched him play every game – even during his two years as a Buc.

Needless to say, his wining is what made him great, but it was his fourth quarter comebacks and game-winning drives that made him special.

For me, the most memorable Super Bowl wins were: the first versus the Rams, the 2015 game against Seattle, and the amazing overtime comeback win over Atlanta (34-28) in 2017, after being down 28-3.

Needless to say, the most painful Super Bowl was the loss to the NY Giants in 2008, ruining the Pats undefeated season.

So now that it’s over, instead of being a hater, thank the good Lord that you were alive to see The GOAT play, especially those who never got to see the likes of Jim Brown, Jordon, Bird, Russell, Orr, Gretsky, Aaron or Koufax. You may have just witnessed twenty years of the greatest professional athlete to ever play.

It’s hard to believe that over 20-years have passed since I first saw that tall, skinny kid run on to the field for the first time.  Much has happened in my life over those years….some good, some bad.  However, it has been one hell of an enjoyable ride being a Patriots’ fan…thanks to that kid from San Mateo, California.

So, as Super Bowl LVI approaches, I look forward to the game and will be pulling for the Bengals. However, nothing will ever compare to the ‘Brady Bowls’ that I got to witness over two decades.

Thanks for all the wonderful memories, Tom.  You are, indeed, The GOAT.