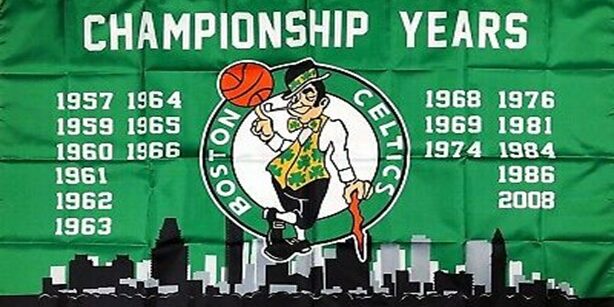 Growing up just south of Boston, I’m a full-fledged Boston sports fan. And why not?  It’s the greatest sports town in America, especially since the turn of the century.

Since 2000, Boston has won (by far) the most championships in the four major professional sports leagues than any other city, with 12 banners having been raised. In total, Boston has won 41 championships (NBA, MLB, NFL-Super Bowl, and NHL) over the years, which is second only to New York’s 52, thanks to the dominance of the Yankees from 1923 to 1962, plus the fact that they’ve had multiple teams in each sport.

Of the 41 Boston championships, the Celtics have won 17.  Since the league’s first NBA Championship in 1947, the C’s have won about 23% of all NBA titles.

And, please, do not tell me that the LA Lakers have also won 17. Not true. The ‘Los Angeles’ Lakers have only won 12 titles. The Minneapolis Lakers won 5.  How (or why) the Los Angeles organization and their fans count championships won in another city is beyond me. Would you include the titles won by the Baltimore Colts for Indianapolis?  Or would you count titles won by the Cleveland Rams and St. Louis Rams’ for the LA Rams?  Absolutely NOT!  So spare me with the LA Lakers 5 fraudulent championships. Again, they have 12. The Boston Celtics own 17.

And while I give my New York friends credit for having the greatest franchise in sports history – the Yankees – the Celtics are without question the second greatest sports franchise ever. (With my Tom Brady-led Patriots challenging them for the #2 spot after their 20-year NFL run.)

For my Gen-Z and Millennial readers, here’s a bit of basketball history:

During the Bill Russell and Coach Red Auerbach era, the Celtics won 11 NBA Championships in 13 years (1957-1969), including 8 in-a-row from ’59-‘66!  That’s a feat we’ll never see again in pro sports. And for those who claim the era lacked talent, the Russell-led Celtics constantly beat teams featuring Wilt Chamberlain, Jerry West, Elgin Baylor, Oscar Robertson, Bob Pettit, Walk Bellamy and Jerry Lucas (to name a few) who, without question, were some of the greatest players in the history of the game.

Also, when talking about the greatest NBA players ever; after Jordan, Russell and Larry Bird aren’t far behind.

In addition, many think the 1986 Celtics, with a starting five of Bird, McHale, Parrish, Johnson and Ainge (with Bill Walton coming off the bench), was the greatest NBA team ever. Needless to say, I agree.  And there’s not a doubt in my mind that Bird’s three championships in 6-years (1981-1986) would have been more had he not suffered an injury that greatly hindered him in the last years of his career.

Plus, God only knows how many more titles the Cs would have won if not for the tragic death of Len Bias, which occurred only two days after being the second pick in the 1986 NBA draft.

Post 2000, the team of Paul Pierce, Kevin Garnett, Ray Allen, Rajon Rondo and Kendrick Perkins only won one championship (2008). However, they, too, were hampered by injuries to Garnett and Perkins, which probably cost them 2 more championships.

So, while you watch current NBA teams constantly chucking up 3-pointers, and you think that’s good basketball, do a little research and educate yourself on hoop history. You’ll learn that there’s no question…the Boston Celtics are, by far, the greatest franchise in the history of the National Basketball Association…and the second best ever in all of pro sports.